I'm still struggling with the jump one ahead pattern that often appears on the 3rd line, and I've got two quick questions from one of my latest games. 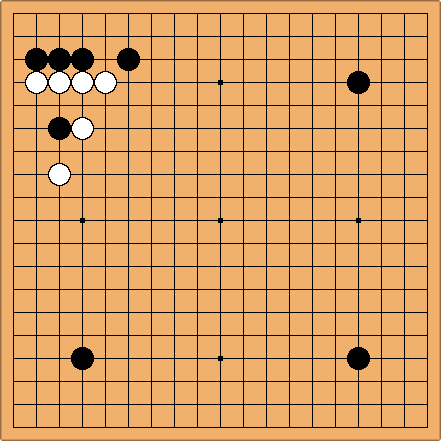 First, what are the possiblities for Black now if he wants to try to control the top side (i.e. make it uneasy for White to establish a group there) ? 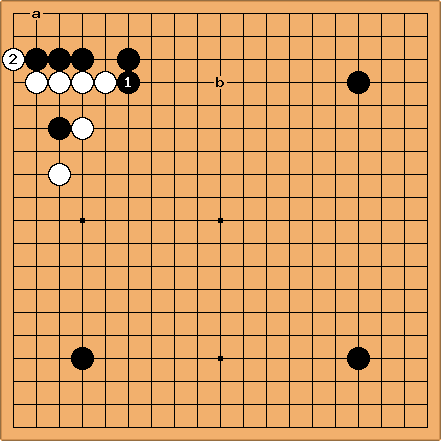 ? Is a the correct local answer ? Should Black tenuki, e.g. at b, and be ready to sacrifice his three stones ? (I counted roughly 18 points in the corner, in exchange for taking sente twice.)

1) The sides adjacent to this corner already are the least interesting at the moment in my opinion. There are wide open areas elsewhere on the board.

2) Black should encourage White to spend several consecutive moves to take territory in the corner after she already made a stable group in gote. I don't think

is particularly good, but

should be ignored, let White play endgame. (Locally Black can block on the first line.)

Thanks for your feedback.

My problem with ignoring

was that I feel like after White captures Black would have to add a move on top, e.g. at the hoshi, so the capture's more or less sente for White and it's a trade between territory in the corner and a moyo on the top side. Do you think it's still profitable for Black ?

Also I indeed realized after the game that the top side wasn't particularly attractive. I should have been clearer, my question was, were Black to want to fix his cutting aji to prevent a White move around w, where can he play ? Maybe a-c ? 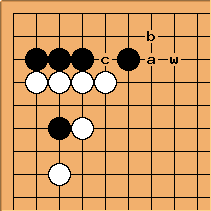 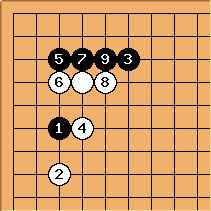 you are stronger along the top side in a natural way. I guess this is too simple to consider for many.

After writing this, I looked it up in my database, and it is indeed a common answer in professional games. Even later I realised, I checked this before: BQM 529

You can also simply answer. Early in the game the fact of being 100% alive is worth more than the 4 point endgame sente you lost. Otherwise it would not be called endgame.

Without it, a checking move by white at the top will include some pressure on the corner. After the endgame exchange that extra value of a move at the top is lost.