Correction: The Fixed Ko Rule alone is not valid for my formal definitions because it does not imply the basic-ko rule as required. Now that I recall this, I move the redundant contents here in this garbage box:

Study under the Fixed Ko Rule and 2 Ending Passes. 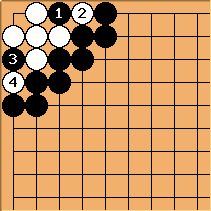 tderz: Just for clarification for the less involved ones (e.g. me): i) What is the outcome? Can White be captured? Is Black dead? :-) Is it seki? ii) "Since dead ko requires that at least one player can create a two-eye-formation or uncapturable string of his o(w)n the ko regardless of whether it is initially open or closed for him" (I guess the term 'own' was intended). In my view, the present definition (top of page) is not stipulating that, rather only " dead stone" of one side.
If the 2nd requirement "two-eye-formation or uncapturable string of his own" was added to the first criteria (that the other colour has "dead stones", then it would be clear, but lengthy , yet perhaps even superfluous, as I would prefer a definition which is apparently obvious at first sight and not after investigations.
If this 2nd requirement was not added, above definition "A dead ko is a ko where one side's stones are dead and can be removed by the opponent quite like ordinary dead stones from territory. " is unclear (at least to me), because it does not unambiguously exclude the possibility that both (color) groups are dead (e.g. which can happen in 'normal', direct kos).
Secondly, the vague relatifier quite (qualitatively: almost?, very much?; occurence frequency: usually?, seldom?; exceptions?) seems to raise an objection w.r.t. clarity.
Do 'ordinary dead stones' (and special ones?) exist, or is the situation of removing an ordinary one?
In conclusion I think above attempt for definition - if necessary at all (sic)[1] - needs further contemplation and re-wording.
My attempt is: a 'Dead ko' involves a group of 'dead stones' and at least one ko at that group., resp. 'Dead stones' with ko [1]('dead stones' can be clarified on its own somewhere else).

RobertJasiek: You absolutely need to know what the Fixed Ko Rule is to understand the position's behaviour under that rule.

In the example position, by convention Black is alive. What about White? White's big string is uncapturable. Black can capture either ko stone but White may recapture immediately and that's it. (After a tenuki, more such useless cycles are legal.) So effectively White's group has 3 eyes under the Fixed Ko Rule.

White is alive. Black is alive. Show me your definition of "seki" and I might tell you whether it is a seki.

The initial description is informal, now with that headline. So don't nail it down to its wording details.

Provide a shorter definition if you can - but be sure not to include and of the other ko types!

Your attempt is ambiguous, too, because "group" is undefined. Let us use the formal definition right away if you want to be formal anyway. 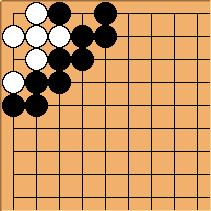 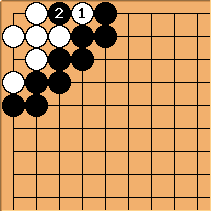 White cannot create a white two-eye-formation or white uncapturable string on the upper ko when it is initially closed for White.