Here is a sample problem from Takemiya's book. I will post Takemiya's solution in about one week. 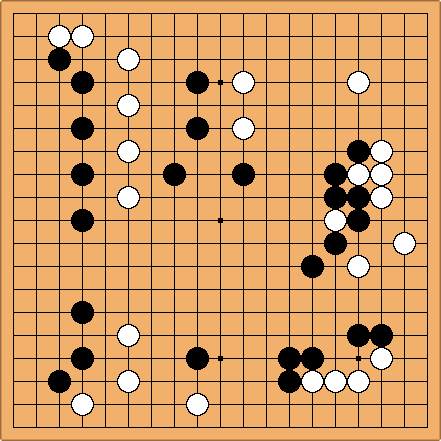 White to play. There is "absolutely one move" to play, very large. Suggestions?

What about a white kosumi in the center? (a7 in Audouard Coordinates) 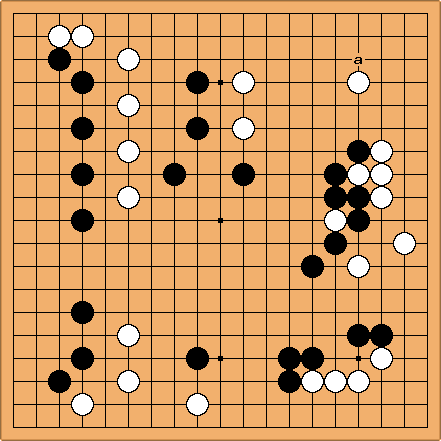 Andy Pierce: I guess a. There's no urgent life-or-death moves on the board. If black gets to invade under the hoshi stone in the upper right, the usefulness of most of white's stones in this part of the board is badly hurt. 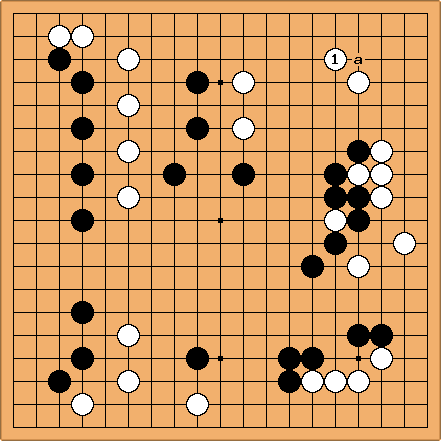 The first place that comes to my mind is

One question to ask is, how big is the center?

My first impulse is to play one of the bs. I'm not quite sure which. The middle does look a bit scary, but I can't see how to reduce it significantly.

Also, is the endgame of

really gote for white, given something like a as a threat? 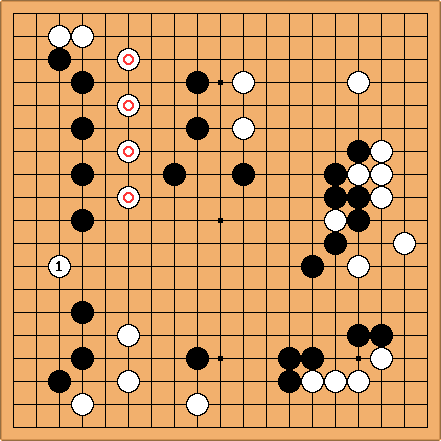 JoelR: If I were facing this board, I'd kick myself for having let the left get so big. White's chain of 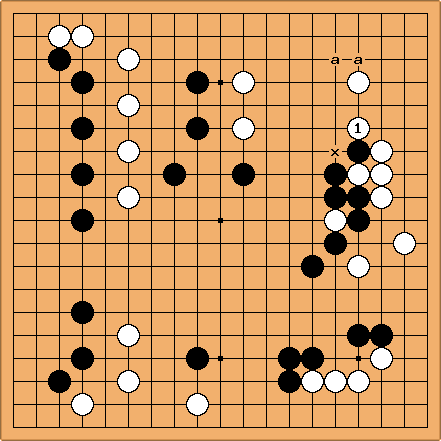 is "absolutely" the best move. Otherwise, B could play as in the diagram below, giving W some evident grief. 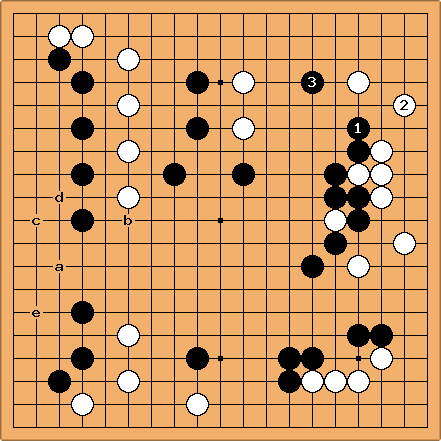 He says also that instead of

at a in this diagram is comparatively small -- it might be followed by Bb, Wc, Bd, and We.

He does not discuss any other alternatives or followups.

My own choice had been to play at x in the Solution diagram, apparently a near miss.

I suppose that although moves at either of the a's in the solution diagram defend the corner, they still allow B to play at 1 in sente, erasing W a bit. Could B then still play

On the other hand, it seems that after Takemiya's

, B could still invade at one of those a's. It would be nice to know what W should reasonably expect to happen after

, to help see why

is still the biggest move.

It seems there is still more to say about this position....

The problem illustrates 2 of Takemiya's ideas. Connect your stones, sa a priority to make them strong (thick play) and because it is big.

The answer to white's invasion - c - also illustrates his views. B plays out to cut w's connections, and plays to surround w, even if it loses some points.

Takemiya really does not worry about territory in the middle game. Something we amateurs find it very very hard to "feel" is right, and a habit deeply ingrained.

I believe that if you play at

, then black is force to play at x. If you play at x, then a ko fight will occur some time later. The point is to connect the right to the top right corner. You cannot break the black wall in the left.