It is also not a farmer\'s hat, which is a combination of two empty triangles. See ext

(1) I just encountered the word jingasa, which I assume maps directly to whatever the Korean word in question is, in a Japanese go publication, and it was precisely the diagram Bill questions (with only one empty triangle), arising from an atari.

(2) In addition, I can't even imagine how a farmer's hat with two empty triangles would arise. Before we assert this, I'd like at least one real life example.

(3) However, I did find one Japanese web resource which stated that jingasa was composed of two empty triangles (アキ三角２つで出来ている).

(4) Another resource gives examples where both triangles are not empty:

In the process of doing this research, I also came across the proverb 陣笠つくって馬脚出す (jingasa wo tsukutte bakyaku wo dasu), which apparently means "make a farmer's hat, reveal your true nature".

I also came across the "clump of four" shape, called baka-yon in Japanese. Is this documented anywhere on SL?

(2) In addition, I can't even imagine how a farmer's hat with two empty triangles would arise.

Bob wrote: Before we assert this, I'd like at least one real life example. 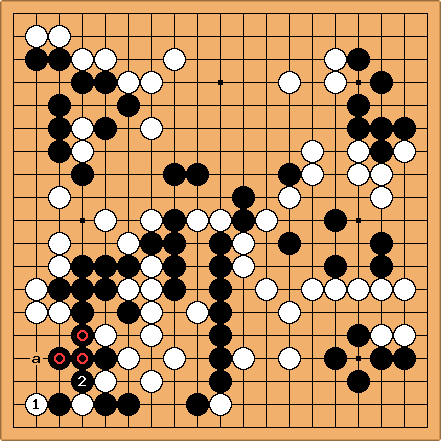 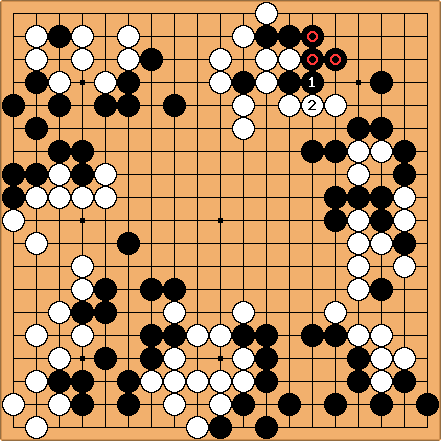 This one is even clearer.

Bob, in my edit I used the example I found on the Web. You may want to use the diagram from the magazine and cite it as more authoritative.

I suspect that the Japanese and Korean usages are the same, but I am not sure. They certainly seem to differ about the eye shape. Even though I found the Korean term, I did not find anything of much use on the Web.

Let's look at it from the other side. Instead of asking what shapes we call the Farmer's Hat, ask what we call certain shapes. 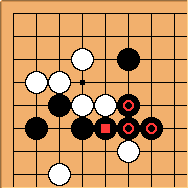 What do we call Black's shape here? If we focus on the three

stones we call it an empty triangle, but if we also focus on the

stone we call it a farmer's hat.

Normally, given a choice of terms, we tend to prefer the more specific one, which is the farmer's hat. But isn't the

stone irrelevant? Don't we call this an empty triangle?

Hmm I started to write something but then read a little more about the discussions here and decided the point has already been covered , so I deleted this post.