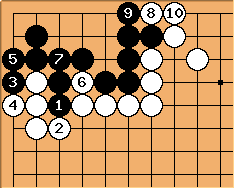 . Kano ignores the fact that

are miai, and that Black's error is 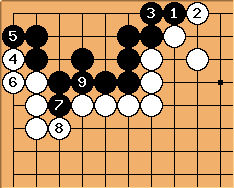 Kano then shows this diagram (diagram 3), for Black to get tedomari.

is better technique, but Black can still get tedomari with 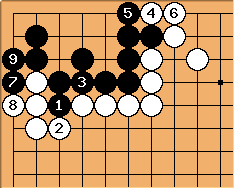 is usually wrong. As it has an atomic weight of 1, Black should normally let White play on those points. But in this case it is the technically correct play, because

are miai, and cancel each other out.

, -- and, in fact, the whole play --, shows that Kano assumed that the surrounding area was White's territory. See Assumptions of Yose Problems.

The diagrams are on the subject of Miai and Tedomari. What the book says is that there are three 2-point gote plays in the starting position. Because

is sente by itself it may look attractive to play it and then turn away. However this is incorrect thinking as

So I do not think this is an erratum. It is simply an example of incorrect play. Dave

Dave: Kano is just trying to illustrate the idea of losing tedomari through careless play. That is the only point of these diagrams. This is not from a problem, rather it is the explanatory material at the beginning of the book. Could he have picked a better example? Sure. Is it an erratum? Nope! (By the way, "Sente dakara to, tsui kuro 1 no de wo uchiso desu ga,...". If Black did not turn away it would not be sente, no? :-)

as sente as the problem, why not give the Technically correct diagram in the book instead of the Tedomari diagram (which I just now posted)? That diagram suggests taking one of the two miai instead of the remaining play. As it happens, Black can still get tedomari, but canceling out the miai plays is the right way to think about it.

Dave: Kanno never analyzes the position. He uses it to show one example of incorrect thinking and moves on. Since the points you raise are valid in a larger sense, I suggest you rename the page and link it into other relevant material on SL. It does not belong in a list of errata since: (1) technically

it isn't and (2) people who are interested in the subject will not normally find it.

Kano regarded the middle play as gote. That is problematic, but he did not have the concept of ambiguous play. 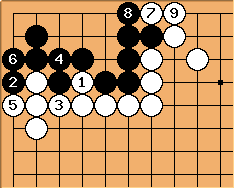 is not gote. If Black ignores it he gives White one more point. 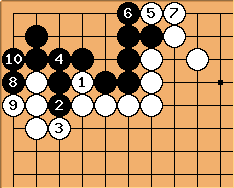