Using the Button with Equivalence Scoring

Button Go is a form of area scoring that solves the problem of granularity by adding an additional ½-point play. In addition to a standard play or pass, a single player may also choose to take the "button" for a ½-point gain.

If the button is similar in size and shape to a go stone, it can also be used in Japanese fill-in counting. Since as a prisoner it represents a ½-point loss, it only partially reduces the value of the intersection it is placed on, and therefore represents a positive ½-point value on the board. (Since the proper komi for button go is ½ points greater than that used for Japanese rules, the komi in this example will be 6½ + ½ = 7) 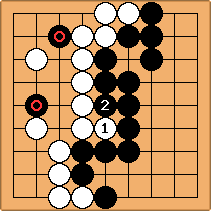 takes the last dame, and

gives the button as a prisoner.

are passes and are also given as prisoners. Both players agree the

stones are dead and can be removed, and one white stone was captured during the game. Since White already made the final pass, the score can be determined: 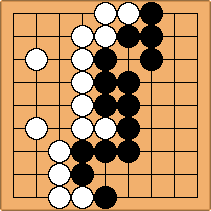 Button go with area scoring will give the same result. This time, White takes the button instead of giving it, and once dead stones are removed, the area score is as follows:

(Incidentally, this is the exact same result we would get with Japanese scoring and the usual 6½ komi, and this is true for most games, which is a benefit of button go.)