Equivalence scoring is a form of territory scoring devised to give the same result as area scoring. The rules are simple:

The score is then calculated from territory and prisoners as usual. 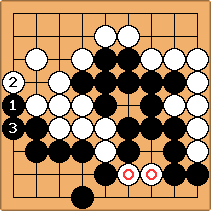 are passes and are given as prisoners. No previous captures have been made. Both players agree the

stones are dead and can be removed as prisoners. Because Black made the last pass, White makes one additional pass with

so that both players have made the same number of moves. 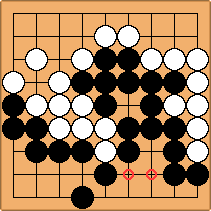 Under area scoring, the final moves are made and alternation ends with two passes. Both players agree the

stones can be removed and returned to the bowl. The result is

What if the players disagree on the status of the 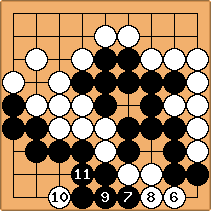 are given as pass stones, the players disagree on the status of the groups. Since Black made the last pass, alternation resumes with White. 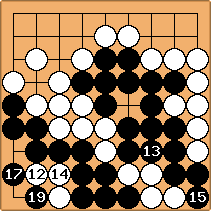 are passes, and White makes the final pass with 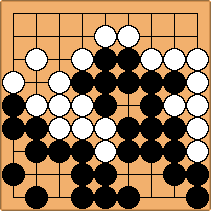 Under area scoring the outcome will be the same:

and Black wins by 1 point. (Under Japanese and Korean rules, this playout would cost Black 2 points, giving White a 1 point win. For this reason, such disputes are resolved hypothetically under these rulesets, rather than with resumed play on the same board.)

It is important to mention that handicap stones complicate the situation just a bit. To ensure that the results of equivalence scoring and area scoring remain equal when handicap stones are in use, it is necessary to adjust the results of one of the scoring systems. The usual manner is to give White an extra point for each handicap stone after the first when area scoring is used. The result will then equal the unaltered result of equivalence scoring. This is the method used by AGA rules, BGA rules, and other similar rulesets.