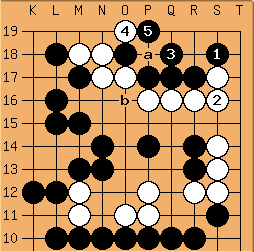 Abydos1: Although there is a lot of aji with the cuts at

and b the only option for black seems to be ko in the corner. 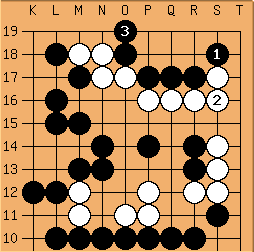 Does this live? There are a number of variations.

Abydos1: Somehow we didn't cover the simple descent when reviewing it but I think ko is still best? 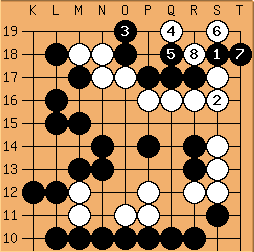 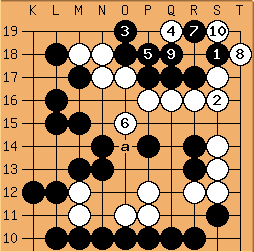 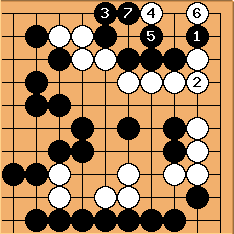 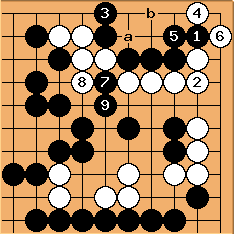 here I believe White has no time to play out the killing sequence, because she loses the capturing race after

. Incidentally, a and b are miai for Black to win the race.

Abydos1: White can play the b a exchange first and then go defend the cut, see below. 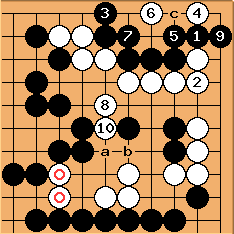 . Then black can take sente and leave a possible seki in the corner or live in gote at c. Black will probably get the a b exchange later and be able to capture the two 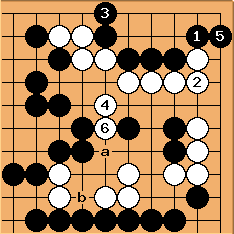 fixes the shape, threatening to capture three stones. Depending on the whole board situation, living with

and sacrificing the three stones, keeping sente, may be the best option for Black. This loss is actually very small, because later, Black can capture two stones with a and b.

I say "depending on the whole board", because Black's life in the corner affects the life of the white group.

is effectively sente against that group. So, maybe Black needs to kill the group to win the game. Since he can only do so in ko, he must really be some ko master to be victorious in such a situation.