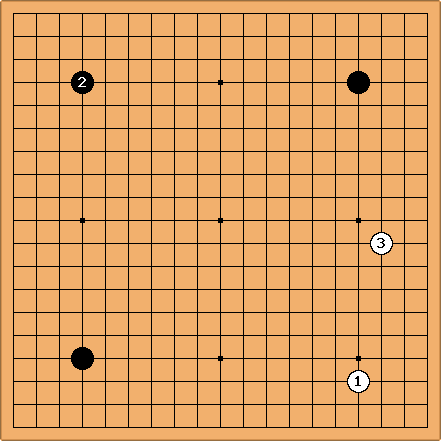 Imagist: I have tried this opening as white in two-stone handicap games a number of times, creating the "Chinese enclosure" with my first two stones. Normally in two stone handicaps, two corners are taken and then white gets the first kakari, but this encourages black to attack first. I can generally make black's life miserable if they invade, so this has good results for me. However, I consistently lose when black completes a sanrensei formation along one of the sides instead of attacking. 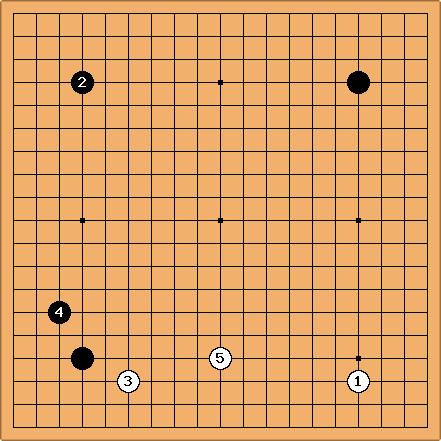 Imagist: I have consistently decent results with this formation, which is taken from the Kobayashi Fuseki. I prefer this because it allows me to play more territorially. 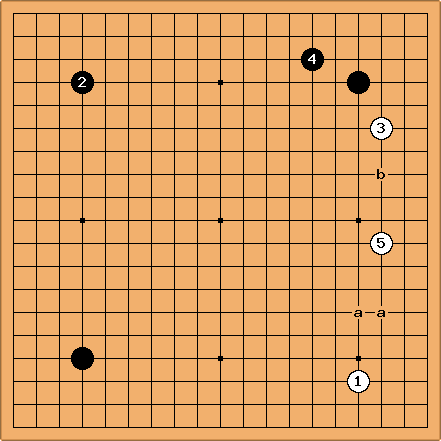 Bill: Have you not had good results with the Mini-Chinese?

Imagist: I have a personal preference against the mini-Chinese because

seems inconsistent to me.

focus on rapid large-scale development, and in that respect,

seems better placed farther from white's other stones. The framework of

also provokes an invasion at one of the a points, with the intent of creating a weak group, but the introduction of

framework preparing for an attack at a, or make

seem misplaced (white cannot attack the b invasion from both sides simultaneously). Lastly, all of white's stones are on the third line, and white cannot afford to play so low with black starting out so far ahead.

That said, I'm presently 16k KGS and 11k AGA, and much stronger players have good things to say about this strategy, so one shouldn't hold my analysis in very high regard. 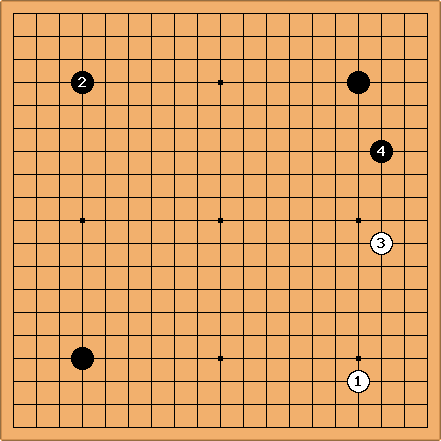 Bill: You have had good results when Black invaded between

is a dual purpose play that makes territory while threatening an invasion. It is unpalatable for White to go back and protect, particularly when giving two stones. 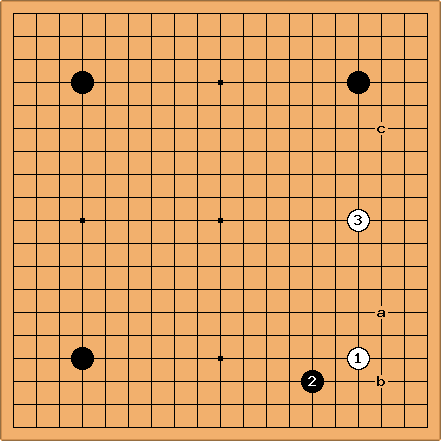 does not entirely ignore black's approach, it develops white's position on a larger scale than any joseki with which I am familiar. The most common response I see from this is a second kakari at a, which is loses some of its effectiveness because of

. The other approach I see is the invasion at b, which allows white to create a nice upward-facing wall. Whatever happens in the corner, white is now well-prepared to kakari at c, making

a dual-purpose move (aiding the lower corner and aiming at the upper corner).

Bill: Let me congratulate you with coming up with the idea of

. It is unusual, but certainly playable.