Calvin (11k): To me, this example doesn't add much and is quite confusing.

in the original example, pushing into the diagonal, is a bad move. I think you need more than one diagonal to say something interesting. 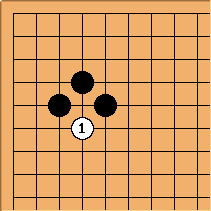 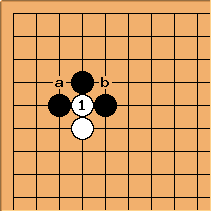 White has this follow-up, which creates two cutting points at a and b. 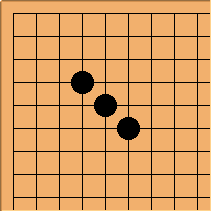 It's harder for me to think of an example showing the problem with this shape. Maybe more stones have to be added than in the above example, but this is the thing I would be trying to understand by reading Minue's page.

unkx80: I suspect one of the reasons is this: 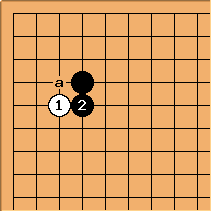 or a is good. It applies pressure on the 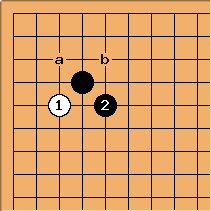 , a or b is weak. It hardly applies any pressure on the

a play on a compromised diagonal. Try not to make plays that improve the status of stones your opponent has already played. 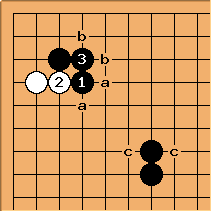 Velobici: Diagonals have cutting points. Cutting points make the position more complicated and plant the seeds of future reading errors. Diagonals seem to add two liberties (labeled a in the diagram), but

threatening to cut removes two liberties. Black can restore the prior number of liberties (labeled b) by playing

which makes a straight shape from the marked black stone.

is a turn; straight shape from

. A turn is often powerful and show why pushing from behind can be so bad. White has induced Black to play the turn. If cut, each group must live independently or kill the cutting stones. Assuming the attack is launched from/to strength, then one of the attackers two groups is already strong, while both of the defenders are weak.

Straight shape does not have cutting points and adds two liberties per move (labeled c). Yang Yilun emphasizes the usefulness of straight shape in defense.

kb: This page needs to be clarified and renamed. Consider the following joseki: 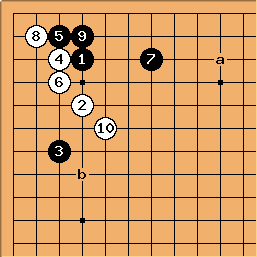 This joseki is clearly not what the intent of this page is (straight shapes are stronger than diagonals), but the page title is certainly misleading. It is important to note the play

would not be joseki if it was not setting up miai (e.g. without the

exchange it is not), but these are completely different principles.