Bill Spight: Here is an example from my recent play: 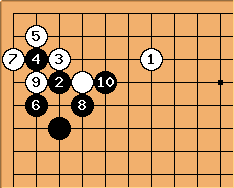 In two games of mine all players were strong amateurs (U. S. 5-dan plus). In both games the play went the same through

. White has deviated from joseki. Let's do a tewari analysis after

Velobici: please provide a link to the joseki move for White and the continuation. 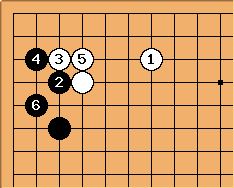 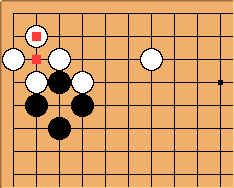 stone was played in response to a black stone at the marked point. Let's eliminate that stone (the black stone is already gone).
Now let's do the hypothetical replay. 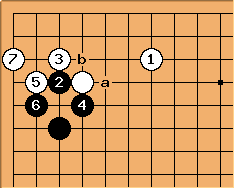 at a would be joseki, but

is clearly bad. Taking the ko, or a, or even b would be better.

Very interesting. I've always wanted to discuss tewari: it is one of the relatively few concepts that approach our western flavour of analysis. 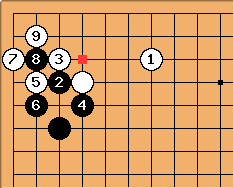 Now, after the criticized move at

(the "superfluous stones" that were removed). Isn't this a favourable exchange for White? In other words, how unfair have we been to White in criticizing her move, by removing two stones that perhaps weren't that equally superfluous. Or yet in other words, what are the opportunities Black lost with

in Replay 2, with respect to the opportunities White lost by playing

in both "replay" diagrams ?

are poor moves at this point, but

does seem to be worse than

. Tewari is not exact. You cannot always say that two plays are exactly equal, but often they are nearly so, and that is the case here. Under certain circumstances, depending on ko threats,

offers a little extra protection. But if we consider the corner to be White's territory, the difference between

were worth substantially more than

, it would be because of the flaw at the marked point. But if White needed to protect that flaw, then

would not just be bad, it would be terrible! ;-)

Without tewari, we might think that White's play was OK. It solidified the corner and left Black without a clearly live group. But tewari shows us that, even given that

is somewhat doubtful and the pairing of the stones slightly favors Black, White has lost at least half a move.

I don't agree with your argument. In particular, "But if White needed to protect that flaw, then

would not be just bad, it would be terrible! ;-)" - there's nothing bad about having to protect that flaw, given that it is going to be protected anyway. Andre Engels

Bill: Since the flaw is going to be protected anyway, the exchange of

dnerra: Bill, I do not understand either how you can come to the conclusion that this exchange is almost equal. It makes the corner independently alive! 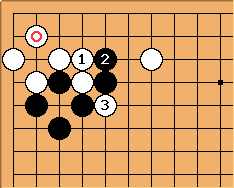 For example here white can cut at

with almost no worries -- a move that would be much more difficult to play without the marked stone, as then black could kill the corner by peeping at the same spot (in case he has good enough ko threats, which I know to be an unrealistic assumption at the moment). So the marked stone is a gain, and you have to compare that with how much worse

. That gets me really confused...

In summary, I agree that black is a little better off, but tewari doesn't help me much in arriving at that conclusion. And I think the loss is much less than half a move, in fact, I would happily pay it as komi if we were to have a game :)

Bill: Well, as I said, the two stones are roughly equivalent, given that the corner belongs to White. Since your critique does not make that assumption, I do not see that it really contradicts me in that regard. To be clear, perhaps I should have shown the position after the next two plays, but they are hardly determined. Besides, after

the damage is done.

Anyway, here is the position from one of the games. 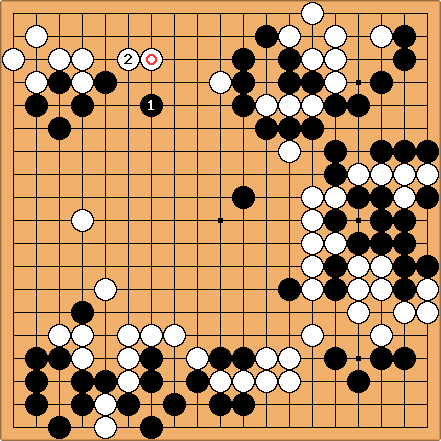 In addition, it is White's earlier protective plays in the corner that allow

to threaten to cut 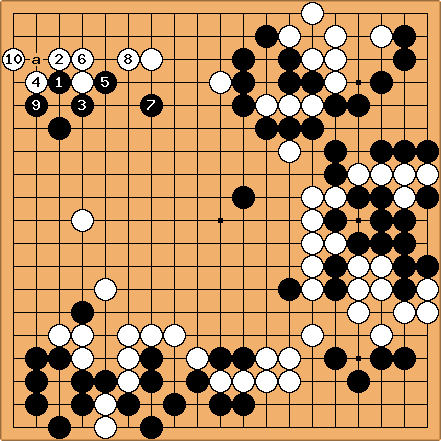 Here is a sequence without the two paired stones.

is at best a middling yose. In addition, it fails to take the ko. At the start of the game, that is a loss of at least a half move. In addition, White seems to have been pushed around a little bit with the rest of the plays.

(Even if you play

at a, which has better aji, the above remarks apply.) 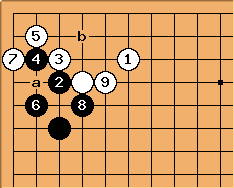 After this Black can start ko or exchange a for b. Pretty close to the original diagram on this page, suggesting that move 7 shouldn't be the one to blame, but move 9. Bill:

comes in for criticism, given

at a, not per se. When tewari permutes the order of play, just because a play may be bad given one order of play does not mean that it was bad in the actual order. In fact, the culprit is frequently a later play that does not work well with a previous play or plays.