Many of the issues addressed and suspicions raised on this page are rather conclusively confirmed in Haengma tutorial for beginners. -- Dieter

A subject of great debate is corner versus center, at least, as far as opening is concerned. Another debate is opening at tengen. Feel free to contribute to this page, no matter how weird your theories are, as long as they're interesting or plausible. 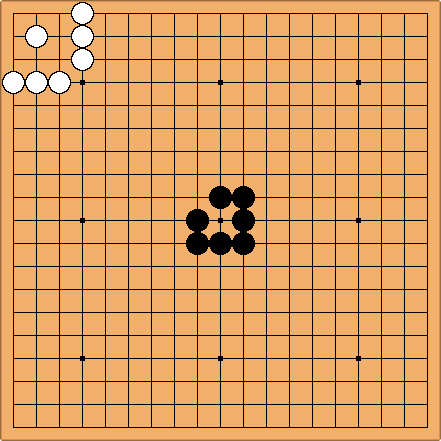 First off, I (JasonRed) think that the misconception is that opening at tengen is trading off territory vs influence, and iffy amounts of influence at that. In my humble opinion, what we're trading off here is possible influence vs security. The corner openings are defensible. Tengen is almost one of the most vulnerable spots on the board, excepting wonders like 1-1, 2-1 and 2-2. - I adjusted your diagram to show you your error. For the same number of stones you used to make 1 territory in the corner, you can easily make 8 (though I'm sure even this isn't the most efficient, but it's definitely safe). The problem comes because you weren't actually using the side walls at all. From this position, 1 white stone can easily capture another 5 or so territory, while another black stone would not necessarily be able to capture any. --15k -

The above was formed with no realism, somewhat like the Classical example of center versus side territory, but it illustrates that a relatively safe position (eye) in the center is worth far more than one in the corner. The problem is forming the eye in the first place. Which makes me wonder about this? 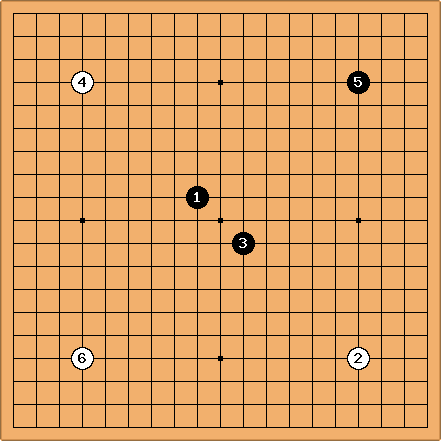 Keep in mind that I'm only 20 kyu or so. But to me, the above position doesn't look too awful for Black, though for the life of me I can't think where

Another factor to me is initiative (sente), and its advantages. In the corners, playing first is a big advantage. Whereas, although the advantage should also apply to playing first in the center, it doesn't really seem to do that. In my games so far, at least. Because of that, my theory now includes orientation around tengen! Instead of playing at tengen directly, I shall open like this: 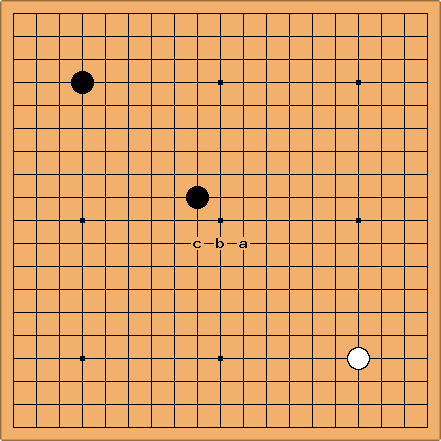 Though I have yet to figure out whether a, b or c might be better choices. Hmm...

- 'a' is wrong, if you play a, then your opponent can play tengen and cut your shape in half. Such is the way of a two diagonal jump like that anywhere on the board, so do not think this is special for tengen. See the GreatCross? opening for more analysis on center openings. --15k -

Onto martial arts theory and practice and connection with Go. Think of the four corners as your limbs and the center as your center. In martial arts, we mainly use the limbs to strike and defend, though you get obscure arts that attack with the body itself (some are surprisingly effective). In any case, these use the center to attack the center. Sometimes the limbs are used to attack other limbs.

There is a basic instinct to build up the arms first, sometimes the legs for Taekwondoe or Muay Thai. Nonetheless, the body does play an important role, and should not be neglected in training. It is possible, though difficult to fight with a crippled limb. But it is just about impossible with a crippled body. It is easier to break a limb than to break the body however.

Regarding the first diagram - it's a complete waste to use 7 stones to make an eye in the corner; You can make an eye in the corner with 3 stones, and 2 eyes with just 6 stones (To be more accurate, you need to form the exact same shape, just without the masochistic 1x1 stone). Think about that before drawing such comparisons between corner and tengen.

Simply changing the orientation of the top left shape to the middle shape gives 2 eyes and two territory, if it helps to think about it in that way. Shachar is right, the territory payoff is much greater in the corner than the center. Just imagine you had a safe shape in the corner,you can much more easily expand your territory than from the center (takes less stones). --15k