Tan (単) is a Japanese word/character meaning "simple" or "simply", which is used in combination with move types such as kiri (cut), yielding the word "tan-kiri", or nobi (extension), yielding the word "tan-nobi". This refers to making that move by itself, with no preliminary or associated moves. The "tan" prefix to move names suggests an important go principle, that it is often preferable to make a simple, direct move, rather than, for example, giving atari first.

An English equivalent is "just extend" or "simply extend", emphasizing the move itself as being proper and sufficient. 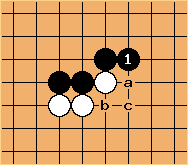 is "tan-nobi" (simple extension), in the sense that Black has chosen (probably wisely) not to give atari at a instead. If he gives atari he will be left with a cutting point at

to be fixed up. (White will probably answer at b or c.)