mat Dave, in your first post mortem statement, you said, Black didn't play aggressively enough. I set up this page to discuss some of Black's possibilities. 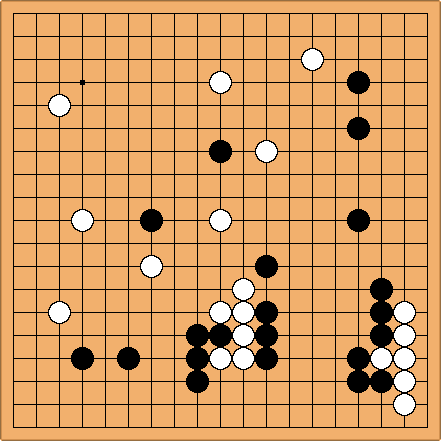 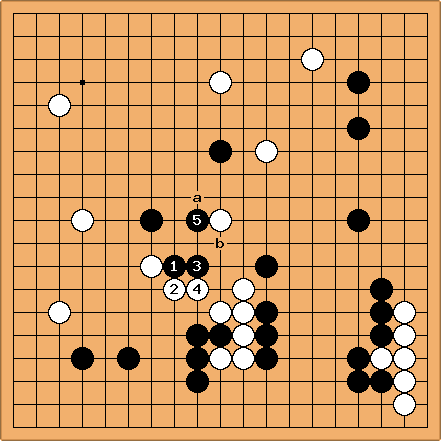 Charles Matthews There are still several invasions possible for Black. White has heavy stones on the lower side. This sequence for Black to make shape in the centre is interesting. The points a and b become miai.

Dave I think that Charles' idea is very powerful. It takes direct aim at White's weakness - the lower side stones. 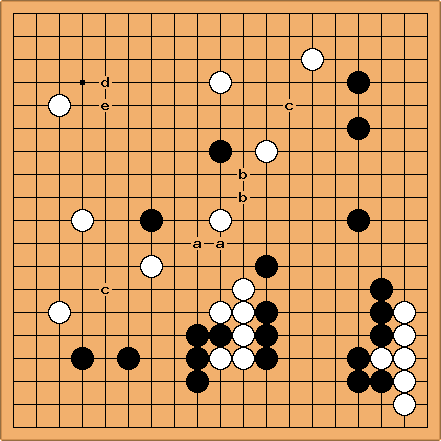 In a broader sense I was worried about the following three approaches all of which make it difficult to follow through my original moyo strategy:

I was expecting Black to play in the corner at this point which is what you chose in the game. The actual move was at d. Somewhere in the comments I believe someone recommended e instead. I agree with this alternative. I consider e an aggressive approach. It is willing to give up the corner (and the relatively safe life that goes with it) but not the stones that Black has played in the center moyo. 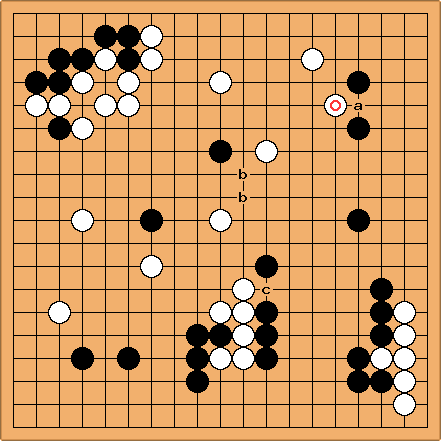 mat Here is the game just after the upper left was settled. White played 59 (marked stone). Are there some big points for Black? Has Black chances to invade and to regain sente?

Dave Most of the big moves mentioned above are still available. Naturally White can't remove them all. I was still considering the points marked b (for consistency with the diagrams above) at the most important gap. This was because it did not even seem that I could start a fight if you pulled your stone out here. It is important to have some feeling for the balance of a game and the potential developments in the future. The decision whether to answer your opponent's move or play away must, above all else, be based on a reasonably realistic assessment of the game. At this point Black's groups are well-ordered and he is threatening to make considerable territory on the right and bottom. The gap at c is almost the only defect. It may help White in fighting in the center or in reducing Black's territory in the bottom right. However, White can not expect to win just by limiting Black's bottom right. Black is in reasonable shape despite having been closed into the upper left.

In addition, you need to make a reasonable assessment of the exchange being proposed by the opponent. In this case the marked white stone will help some in closing off the upper side. It is not ideally located in relation to the other white stones in the area however; there are still gaps. I had a difficult time trying to find a reasonable follow up play. Responding at a makes Black very strong. Letting White push through at a would have greatly strengthened White's grip on the upper side and at the same time broken up one of Black's largest potential areas. 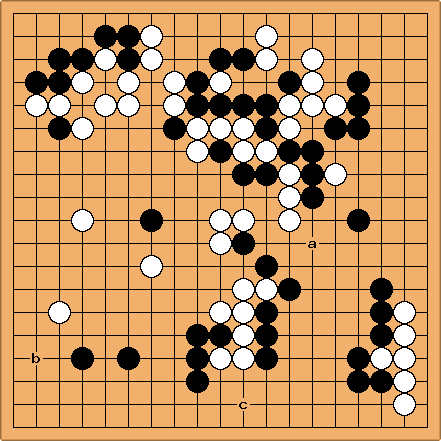 mat Here Black has just lost the battle for the upper side and has sente. In TG53 Black played a. Which are the big alternatives?

tapir: I would consider moves like b and c, but not a.