The original diagram was: 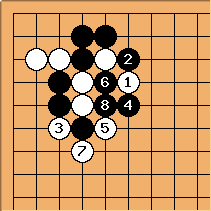 If Black wants to avoid the white tenuki, he can play at 4 here. Black is now guaranteed sente, but his thickness is much less than in the basic joseki, so only rarely are there points elsewhere which are large enough to makes this worthwhile. 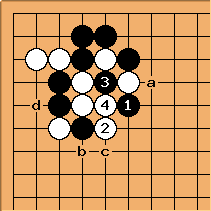 Dnerra: I don't think I understand the last diagram. What should happen if White plays at 4 in this diagram instead of White 7 above? (In fact, we are then back to the main variation.) The normal play would be for Black to capture at a, but then White would get the tenuki that Black tried to deny her. So his only move is b, and after White c or d: it gets too complicated for me. Maybe it will continue like this... 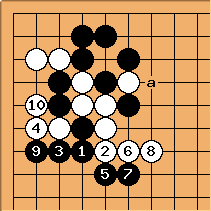 ...and if Black plays tenuki now, he will be pressed on the upper side when White pulls out with a. (If Black has no HUGE ko threat, White can also pull out at a earlier.) Hmmm, but maybe this is playable for Black (under the assumption that he urgently wants to tenuki).

The other variation for White is even less clear to me: 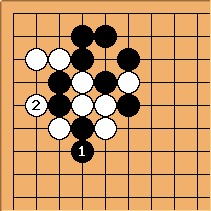 unkx80: Basically, if Black interchanges 6 and 8 in the original diagram, then you will have no complaint to make. :-)

Dnerra: Oops, very much indeed so :-) 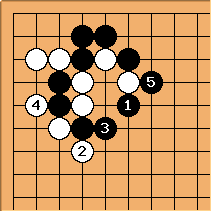 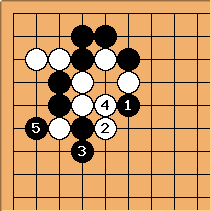 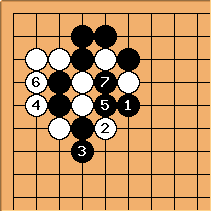 GoranSiska Some time go me and my friend investigated this line and these are the variations we received as the answer. 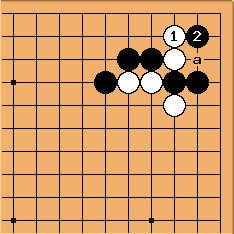 (or a) is described as a mistake that results in considerable White thickness. I can guess, but can someone who is familiar with this variation please elaborate?