Charles Matthews This line of thought was in part prompted by an observation on the Mark II Kobayashi formation. 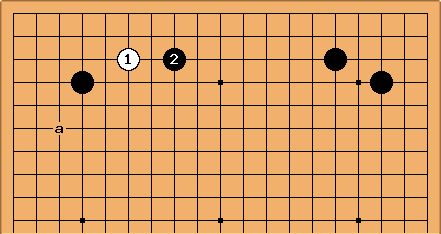 It was quite striking for me, to find that there are no positions in my database for the continuation after

The first line of explanation is that

at a is the preferred approach (true). That's related to the closed side - closed mind discussion. On occasion

is not a normal answer, though.

That must be explained somehow by matters lower down on the left side. Still, I feel I could see this sequence today in my club. It shows the refinement of pro feeling for the opening, that we get these gaps. 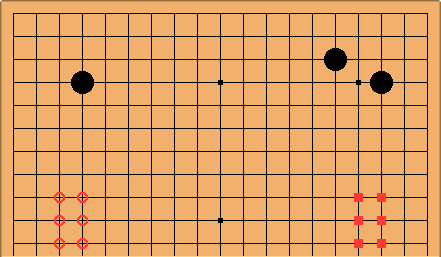 It is fairly obvious that the presence of a black or white stone at one of the circle-marked points might affect White's joseki choice in the upper left. That might depend too on how strong a stone it was, also - but in thinking about side patterns one has to stop somewhere.

It is less obvious, but true, that stones at the square-marked points will affect the joseki choice.

This 19x11 is one line larger than the 19x10 taken as standard on the side patterns page. If this is used, there are clearly 24 patterns 'with outliers' for each basic side pattern.

One may wonder how useful such depth of study is.

To take an example: 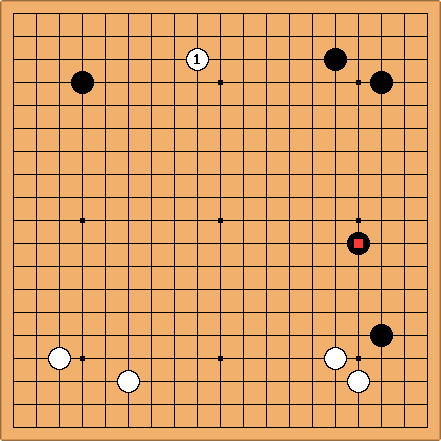 is quite noticeable. The wedge

is not a normal choice in the Mark II Kobayashi.

In this case Black's framework on the right is broad and loose. This puts establishing a group with

at a premium. Such a wedge seems only to be played in just this situation.