Alex: So, I was checking out some games in my copy of Invincible and saw this sequence: 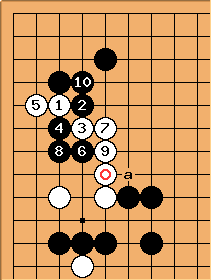 is judged superior for Black by Fujisawa Shuko, who suggests that

should have been played at a, followed by

for a base. Nonetheless,

here was an interesting move, and got me thinking... 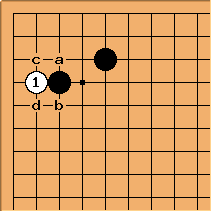 We've all seen this probe, because it's mentioned in many pages here on Sensei's. Black's usual responses are from a to d. I notice that it's also very popular among dans and low kyus on KGS - could it be that many of these players learned it from Sensei's, or picked it up from other players, who in turn learned it from Sensei's?

gronk; Probably more of its popularity is attributed to its discussion in books.

I think most go knowledge probably flows in the following sequence: from pro use to being in lots of books to being used by lots of dans/kyus to being posted on Sensei's. There are feedbacks.

Of course, it's played a lot in pro games, so people might be learning it from there, but then why is it so much more popular than other methods of dealing with the low shimari? After seeing the other attachment shown above, I got to thinking - how many different kinds of probes and kikashi are there against a low shimari?

So, I started thinking about possible sequences, such as: 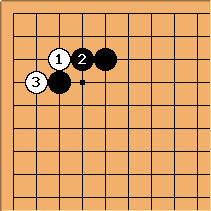 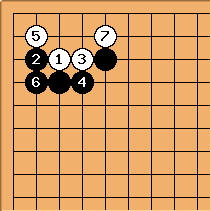 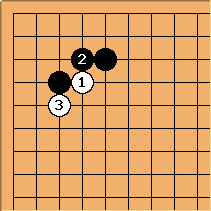 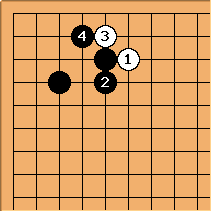 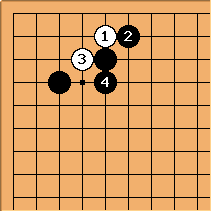 ...and so on. The more I thought about it, the more moves started seeming like they might be playable in some circumstances, even better than the probe we all know and love.

So, I decided to go to gobase.org and do some pattern searches. It turns out that just about every move you could think of in the corner gets hits. Not just a few, either - most get hundreds, and even the weirdest ones get dozens.

You even get weird sequences that would never occur to most amateurs, like: 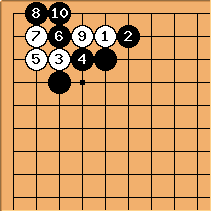 So, what's the point of all this? I just thought it would be worthwhile to call attention to the fact that all the following moves can be effective probes and/or kikashi against the low shimari: 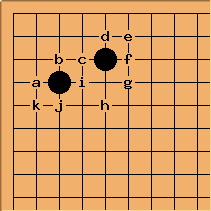 A similar multitude of moves exists against the high shimari. One can only imagine that there must be even more against the large shimaris.

It's outside the scope of this page to try to examine all the variations (it would make a good book, though!), but it's useful to know that the other options exist. I know that, in the past, I would usually play at a instinctively when preparing to invade a shimari-based moyo, because that's the probe I see all the time. Now, I'll surely start reading out the other options and trying to make an educated decision. If nothing else, it should throw my opponents off, a little.