Some alternative variations to the solution of "Practical Endgame Test 1".

The solution is that White wins by four points - you can find that at Practical Endgame Test 1 / Solution. 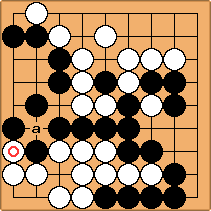 White has just played the marked stone. In the solution Black answers at a next. What happens if Black does not answer at a? 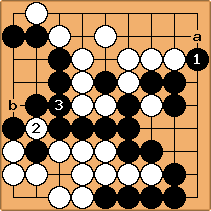 Instead Black plays 1 here - White captures at 2 and Black 3 here is forced. White can play at a or b next. 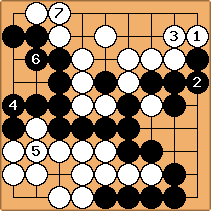 If White blocks immediatly with 1 and 3 she will win by 4 points again. Black cannot hope to win the ko so he just connects at 4. Then 5 to 7 are necessary defensive moves. 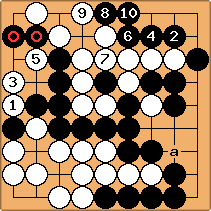 The other route is White capturing at 1. Black must not block at 3, because then White will close the right side just as before; but she will be better off by two points. So Black plays 2. White plays 3 and threatens to capture the two marked stones.

If Black connects at 5 now saving the two stones, White will play at 4 and win by six points. As Black has no eye on the left side he has to protect the cut at a, eventually.

Thus Black plays 4. If White gets greedy now and captures the two marked stones with 5 she will only win by three points! One point worse than the correct solution. 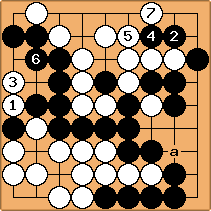 Instead White has to play at 5 here. Now if Black connects at 6 (which is the biggest move) White will win by four points. 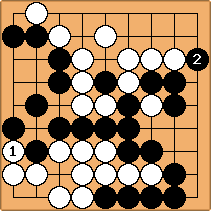 The above should have proven that White 1 is indeed the winning move and that even if Black answers at 2 the result is again a four-point victory for White.