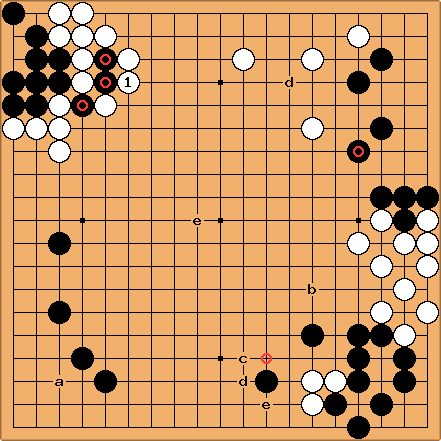 looks pretty urgent. After this

Alex: Actually, all of the suggested moves a through d are too close to strong positions - either the player's own, or the opponents. a will die, b is jumping out to the centre with a group that already has half a dozen eyes and doesn't need to run anywhere, c is much too close to thickness (and is also aji keshi after Black responds at the circled point), and d is too overconcentrated to be honte, even though there is some aji there.

I'm not convinced that the suggested

is actually urgent, since White can easily capture either those two stones or the other one, and the corner is dead anyway - the only question is how easily Black can exploit the aji of pulling out the two stones and forcing white to capture the other one, in order to reduce the White moyo. It might be correct, but I'd be looking more at finding a point on the border between the White moyo and the Black one, while reducing the aji of those stones from a distance. Something like e, maybe.

What about one point below c? That seems like a fun time.

Alex: Trading d for e does seem like a better forcing exchange than c for the circle-marked point, but then what? 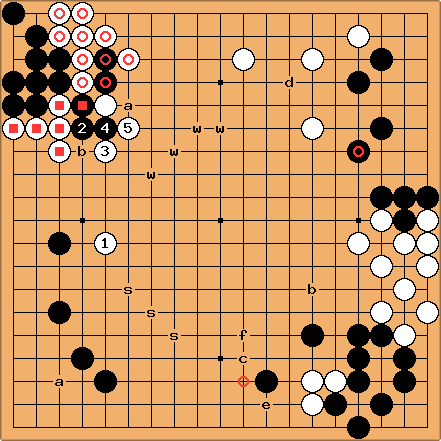 tderz: I agree with Alex on all points.
I just want to show that - in addition to Alex's remark that White can take either of the marked stones - the two marked white groups are always connected,
independent of ladders. (if Black a, White b)

, this one here could be interpreted as being on the borderline of two moyos (White's w and Black's s), thus s.th. one wants to play. The

below would be meant to stirr up local trouble, usually the shown

would seem (IMO) to steer the game home with less surprises.

However, the two moyos (White's w and Black's s) seem comparable, whereas Black has two corners (ur & ll) in contrast to White's overconcentrated ponuki-group on the right. Hence, planting a White

in Black's biggest territory/moyo for testing him (he will react) is good.
If, for example, Black descends to d (suggested by Alex), then I might leave

as forcing move and still play

or jump to f and reduce (must watch, that this group won't be driven in White's moyo, thereby destroying it, whereby B would saveguard his two-corner territorial advantage) 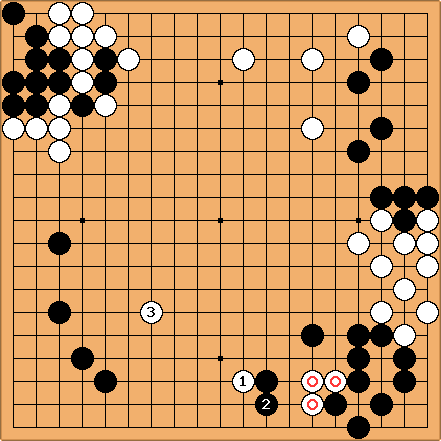 Bill: I think that Black is quite comfortably ahead unless White takes emergency measures.

looks good for a probe, to get something out of the