Black has 1 prisoner. White has 4 prisoners. No komi. 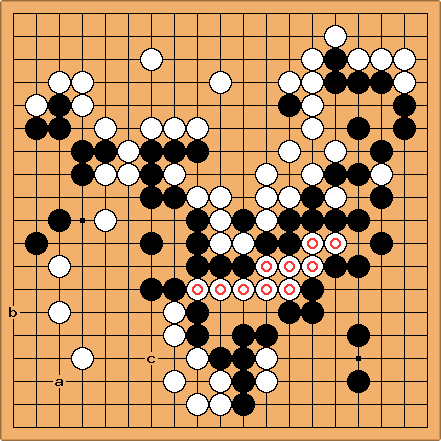 Chris Hayashida: Both players actually thought Black was ahead. White actually resigned at this point.

Playing Black, I had just cut off the the marked stones, and still had 3-3 invasion at 'a' which would lead to a ko for life.

The score estimator on KGS said that White was 27 points ahead, though.

SnotNose Counting, we find white is ahead by about 10 points assuming she gets all of the lower left corner. It is clear that the lower left corner is the area in which black can do the most damage. Question is: can a direct invastion at a work? I think not unconditionally. Are there better altneratives?

Note white's weaknesses in this area: (1) The monkey jump aji at b making any black move adjacent to b sente with threat to connect, (2) the peep at c which threatens a large ko, (3) and, of course, a itself is a weak point.

Below I explore some ideas. I think I found one that will work. Perhaps others see flaws or other variations.

In the end, the monkey jump is the simplest solution and is easily enough to turn the game to black's favor. A direct invastion at a is asking for trouble and is unnecessary. Moreover, due to white's shape, the standard response to the monkey jump won't work so black has a chance to eat up a lot of the corner.

dnerra: With all respect -- if the players were below 6d KGS, then resigning was non-sense. (If they were better, it might have been non-sense, too, but in this case I cannot judge :-)

SnotNose Who said anything about resigning?

Chris Hayashida: I did. White actually resigned. I had friends coming over, and we both thought he was behind after the capture of the marked stones. I don't think either side counted the board, but only estimated. (This is partially why I thought it was a good problem.)

dnerra I am pretty convinced that the invasion does not work (i.e., it is not even ko). So black has to start with the monkey jump, and the game is close.

SnotNose Agreed. The monkey jump seems the sensible way to go. However, see below about idea #2.

First, about the invasion:

White has many moves to try to kill black, e.g. a through c. I would be very surprised if none of them work.

In this variation, white plays passively and black lives easily. But white can try other things.

So idea 1 doesn't work this way. After black a and white b, white has killed the corner. What about the following?

What about peep first? If white resists at a, black b or plays at 2 for a ko. So, let's assume white connects.

Does the cut at a now work for black?

white plays squeeze and black lost everything so this idea stinks (thanks for pointing this out Hollgar). Here are others.

threatens to connect via monkey jump.

dnerra: But the corner is dead if white plays hane at a, isn't it?

Not having a lot of experience with this shape I am sure there is a lot I do not see. But,

is a threat to link up to

dnerra: I don't see how black wants to play after

? Let's keep going until we find out if there is something here or not. Your move.

. If Black a, white b. (With or without capturing at

before.) Same after Black c. If Black at d, white gives atari at a and Black cannot even connect.

Anyway, this discussion hasn't much relevance, as both White (by answering wrongly to the invasion) and black (by not choosing the ko) have IMHO played suboptimal before.

SnotNose: You're right. Looks dead. Idea #2 dies. Every game has suboptimal moves. We're just exploring black's options here and, in doing so, we're revealing some sequences that are bad. That's okay. In the end, we've found a good approach, below.

SnotNose: Oops, actually this position does give a ko. See joseki-related life-and-death example 3.

Lucas: Actually, the two situations (the one above and the one on joseki-related life-and-death example 3) differ slightly such that here Black is dead and there Black lives in ko. The difference is the presence/absence of

in the previous diagram. This position is described in a later chapter in LifeAndDeath by JamesDavies, but the shape is not given a name there, as are some of the other corner shapes.

Idea #3 is simply to monkey jump.

should be at a.

Black can a to link up in sente and the play c or d to eat away more of white's area.

might also be played at a or b, in which case it gets pretty complicated.

Black may also be able to play b and live. Let' see...

zephi? I'd like to make a correction if I may (tho no one has done anything with this page for a long time). There is a better response to the monkey jump tho it ends in w gote and b can still try to monkey around, but if he does, w simply forces him to connect in gote

. If black connects at d I think he is alive. If black plays at a though, there is a ko following white b through f.

There is a ko at a. If black plays this way, he'd better have enough ko threats because the game will depend on the ko. But, as shown earlier, black could have lived with the connection at d in the previous diagram, in which case the postion would look like...

zephi? correction, after b plays the 2-2 point he is unconditionally alive...it'd be silly of him to allow w a ko

Since there is no white stone at a, this is a living shape.

Thus, white can't stop the monkey jump and push into the corner and will lose a lot of territory here.

Black still has b or c for later. 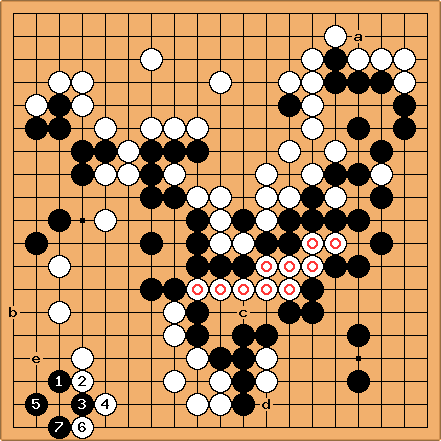 Chris Hayashida: This is what I had in mind. I thought it was a "standard" invasion for ko. It's possible that this line of play does not apply in this situation.

I wanted to use plays at 'a' and 'b' as ko threats. I think 'a' threatens to cut off the upper right (and the corner is dead, if I read it out right) and 'b' is just a normal monkey jump.

The only big threat I saw for White was at 'c', threatening to pull out the marked stones. I didn't think 'd' was that big, compared to the corner invasion.

Why doesn't this work? Is there a better response than

Klaus: The standard idea to avoid ko (and kill, if white is strong enough!) would be

at e, but I am not sure if it works here.