This is a game that can be played on a Go board with Go stones. (See Go variants for more such games.)

On each player's turn, that player has two alternatives.

So in my notation, I'm marking jumped and removed stones with a square. Observe that a single square jump usually accomplishes nothing. The other player merely replaces the jumped stone.

Double jumps are important because the change the parity of the board. A double jump tends to make existing stones unreachable, and a double jump is a serious threat. 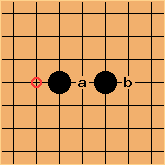 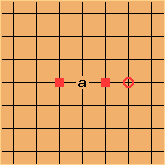 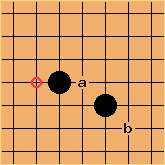 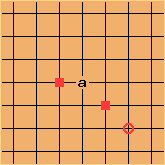 You can also change direction. There is no limit to the number of stones per jump, and number of jumps in a turn. A stone is removed immediately after it is jumped.

Also observe that if Left wants to foil the jump to b, Left can tackle by playing at a. This still is moving in the wrong direction, but it frequently is the lesser of 2 evils.

You win when the ball is over your goal line, or on your goal line at the end of a turn. You may temporarily jump the ball on your opponents' goal line provided you immediately jump it back as part of the same turn 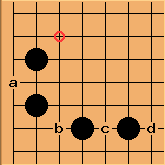 In this position, Left can win by jumping to a. Right can escape to d via a, b, and c. Right temporarily places the ball on his opponent's goal line, but he moves away on the same turn. 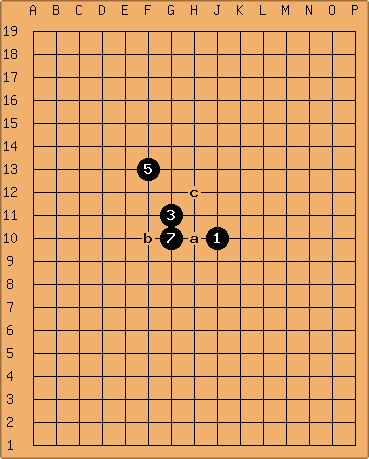 If anyone would like to play it, pls feel free to edit this page. Enter stones by writing odd numbers into the diagram. These will be rendered as

is reached, copy the whole board diagram and continue.

- Anonymous: Isn't '1' considered to be the standard opening?

Anonymous: Perhaps it would be better to use a marked stone for the ball, black stones for Right's moves (the player moving to the right goal) and white stones for Left's moves.

is an AWFUL move for Right. I'm going to change it to something more reasonable.

. Never played Phutball before, sorry. By the way, I did not play 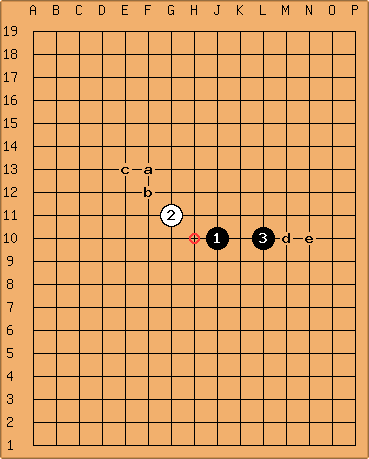 at a is a wasted move for Right. Any stone a knights move from the ball has very little value. Playing

at b is "standard" for Left at this point, but I'm playing Right. Playing

at c is being too greedy.

at b forces Right to jump to d. With

at c, Right can just play a stone at e.

(Sebastian) I'm confused. What do you mean by "jump to d"? Jump with the ball? Or do you mean a 0 space jump from

? Also, could you pls elaborate for absolute beginners like me what you mean by "forcing"?

Re Notation: Looks like you're proposing to use letters from a-z for marks. Would you say there's never any need to write down the ball's path?

Another thing I find confusing: In football, team A tries get the ball into team B's goal. However, from your choice of words it appears that Right tries to get the ball into his/her own goal. Is this the common way to talk among Phutball players?

unkx80: Interesting. Because from what I read on the

Wikipedia, it says "Ohs tries to move the football to rows 19 or 20 and Eks to rows 1 or 0.", so I thought that I am supposed to move the ball towards the top. Thanks for the clarification.

Anonymous: In Winning Ways, the place where the game is first mentioned, the orientation given is left-to-right. Obviously, the game is the same either way, but it's important to agree on the orientation before starting! So we'll follow the convention I outlined above on this page.

Paul: The game is NOT the same either way, because the board isn't square (this is NOT a go board). We have to play up and down...

Anonymous: Outis, there are a couple programs for the game now,

Anonymous: This is really cool game. Something more fast. :)

Quacki: I wonder whether Monty Python's thougth about this when they did the Philosopher's Football Match. Sad to say, it has no similarity with this one.

Anonymous: A little research on wikipedia shows that the monty python sketch predates Winning Ways by about 10 years. So a better question might be whether the game was influenced by the sketch...