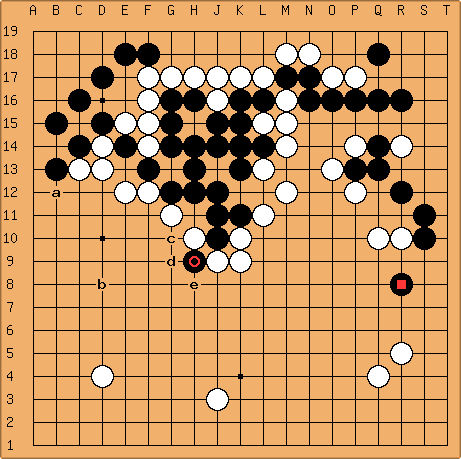 tapir: Who is ahead? How strong or weak is

? How to continue for both sides? (Black has captured 3 white stones, no komi.)

xela: I agree with your count of black's territory. I would say that

is very weak (because the white groups on either side are in no danger), and that white's influence is worth a lot. However, the presence of

greatly spoils white's chance of turning the moyo into a lot of central territory. I'd like to see the play leading up to this move, and look at where white might have gone wrong. The gap at a is also unfortunate.

Without komi, I think black is a little ahead, but I don't think it would be an "easy" game. I'd expect black to win by 5--10 points with best play (and as you point out, "best play" doesn't happen very much at our level, so white still has a chance to win). Black doesn't have the option of just taking more territory without leaving a weak group: sooner or later, black will have to put another stone in the bottom half of the board.

For white's next move, I'd choose b. Let's see how black goes about living inside white's moyo...

tapir: Well, black can connect with c. But I like the idea to make connecting (which leaves forcing moves) unattractive. But I would consider the ataris as well. BTW In the original game I (as white) had an somehow easy win as far as i remember. It doesn't look like it should end like this, however.

xela: Yes, that's a bit careless of me, maybe white would do better to exchange d for e then play b. 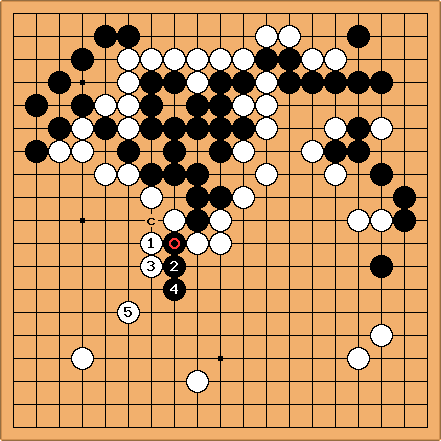 BCh I would say that black's circled stone is in a really shaky position. To me, the question is, if white plays 1, does black have a move that allows him to sacrifice that stone ? As I don't see an easy one, I'd rate the game at -5 PJS.