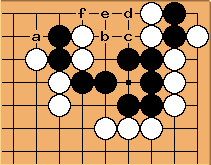 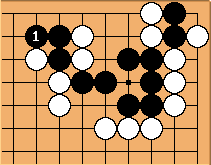 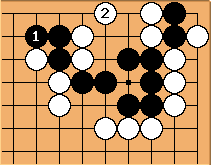 White connects, main black group is dead even if the three stones on left might escape. 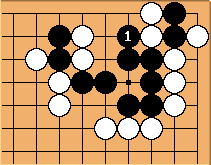 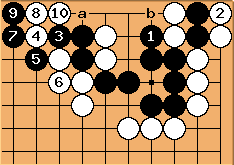 Black lives only if White plays this sequence follishly to

allowing Blace to capture at a. White can play b as

to connect to White's two stones and thus kill the main Black group even if allowing Black's few stones on left to escape if they can. The longer White delays in playing b after

, the better for Black. 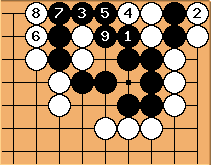 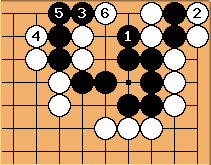 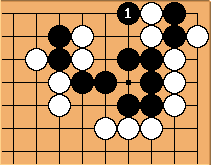 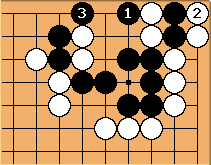 YongCao? I think should play 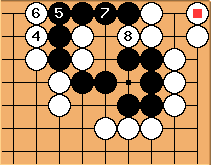 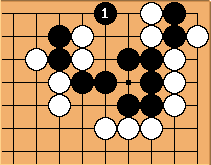 at a or b. After either choice White must next choose whether to capture Black's two stones in the corner or four stones on the left leaving the other group to make the second eye for Black. In all scenarios, it seems to me that White will be better off after

to capture it and the two supporting stones and to allow Black to live have the second eye in the corner. This makes the White wall on the left solid with no cutting points.

White can play either at

(in which case letting Black play at

PeiweiCao? One of the two blocks of White will be eaten, and Black lives.

Jared: This could be called a "double sacrifice" set-up, with a "double-snapback-threat throw in"

PeiweiCao?: Consider white move 2 at p19 instead of m18, I believe that white p19 assures the death of the black corner.

, then the tesuji of

Alexandros? Not a very good player here, but I think PeiweiCao?'s method fails to the following:

Then, as I read it, if black picks this path: (with move 3 filling in the liberty)

(of the previous diagram) then White has to choose between a and b to decide which group to capture and which to let live to make the second eye. The capture at a seems the obvious choice.

Alexandros?: I'm not sure if it's cheating in a problem, but White could play

in that case, and run into the wall at the other end of the board. Of course, this goes beyond the bounds given for the problem, so it may be wrong...

unkx80: By the usual conventions in life-and-death, we assume that the rest of the board is empty, so feel free to extend the diagram as you wish, so this is not cheating.

For your question of

, I leave it as an exercise: What is the gist of this problem? The tesuji has been mentioned on this page at least twice already...

(of previouse diagram) then Black plays

at P18 for double atari to capture the two White stones when White saves the three stones in the corner. However since Black is open on the top this is not so good for White.

kill black. Allowing for the run to the other edge of course.

is a mistake, should be at 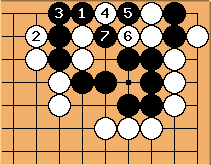 BluPian0: A tricky snapback to find. Thanks goes to Violence for helping me find the solution.

Gregory In this variation on the solution of

, White takes in corner with

, so White can close the top with

AVAVT: Hm... I doubt this is the proper solution. After

what would you do?