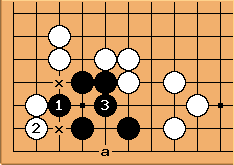 White can't make the eye at a false. It is very important to leave the points x miai. 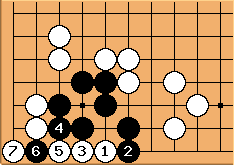 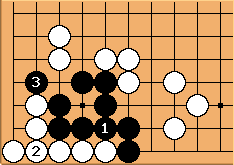 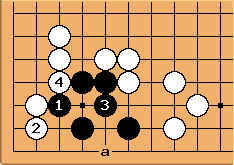 Mike Kaulbars: OK, I'm a newbie, but I do not see in Solution 1 why White does not play 4 instead of a. Thanks. 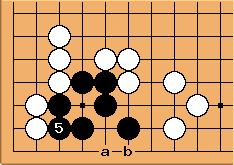 Mike Kaulbars: Yes, the forced move. What I was missing was the correct sequence to a second eye and life. I see it now (that's how I play too, seeing the obvious after I've played). Is there a proper Japanese term for the worst possible choice in a local situation? I need it to properly describe my games ;-). Thank you.

You could have a look at Zokusuji for instance, which doesn't mean worst, but it's kinda related. I often use imosuji? to describe my own bad moves, but I prefer to let native speakers explain what it exactly means ;-) --Nando 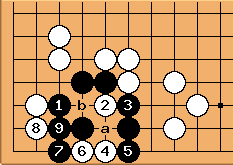 Jasonred: Does this sequence manage to kill black off?

Confused: Not really. If White plays at a, Black kills the group with b and has a nice bent four shape, which is alive by either playing at 4 or at a. If White plays anywhere else, Black at a makes two eyes. 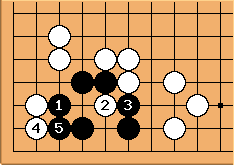 Black 3 would be a mistake: After White has taken the VitalPoint with 2, she turns back to 4. Black is left without a clue. So ... 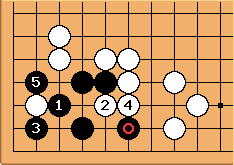 ... Black has to continue in the corner. Can White now cut off the marked stone ? 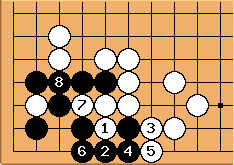 Not really a problem.