Make An Eye And Die

There are situations where making an eye is disadvantageous in a semeai. In the following example, making an eye in gote wins the capturing race for black by 3 liberties, whereas not making that eye wins it by 7 liberties! 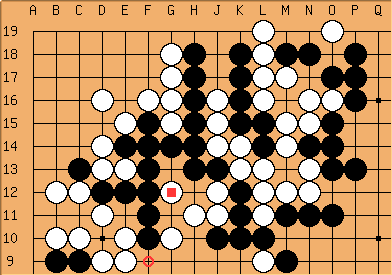 White will play the circled point, after which black can capture the single stone in gote but it will cost at least 3 liberties. Would like it if some semeai expert could show the optimal sequences. 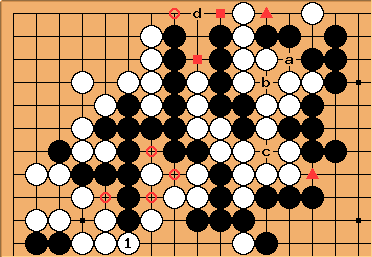 right there so that it becomes a capturing race.

It's probably easier to show the sequence. 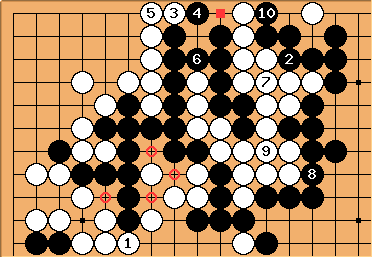 This is how Black should approach the semeai technically and we can see he has 4 outside liberties left. So there's no hurry. 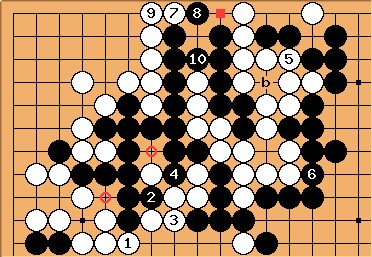 would be daft: an eye is only useful when there are lots of internal liberties to usurpate. But

takes an eye too and Black has consumed already 2 of his own liberties. To make things worse, b is now not a place to fill early.

gnostic?: That's a good point, could you elucidate more clearly when eyes are useful? My point in this article is that there is a clear cost associated with eyes, and sometimes the cost is not worth it, but evaluating a possible semeai before it even appears on the board is very difficult without very precise heuristics. Can we adapt the equation (or inequality) from the EyeVersusNoEyeCapturingRace page to describe precisely under what circumstances making an eye will result in losing the capturing race? 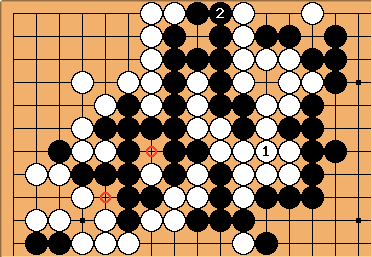 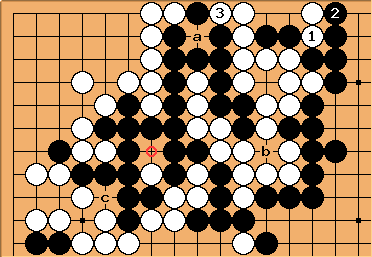 However, White can save a part of her group in ko. If Black connects at a then White b connects and Black cannot avoid the atari of c next.

is a smart move to gain tempo.

I think the best approach is to mentally make the eye, then see which kind of capturing race you're in and do the math. See below. 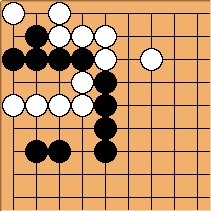 In this situation, Black has 2 OL, White has 4 OL and there are 3 IL. Either player, when trying to kill the other, will have less OL than the sum of opponent OL+IL, so this is a seki. 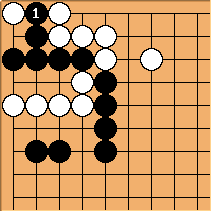 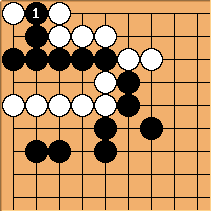 Here, there are 4 internal liberties. Now

turns the situation into 5-4 for Black. One internal liberty makes the difference between suicide and kill. 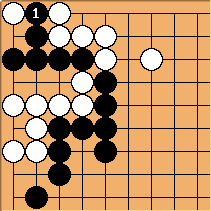 Here White has 3 OL and an eye.

will shift the 3 IL into shared liberties and it's seki. If White could play at

, then the IL would become hers and Black is dead. 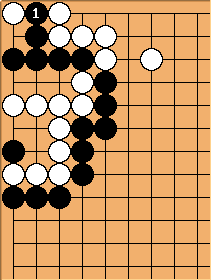 This time, White has 4 liberties through her big eye. Now it is completely pointless for Black to play 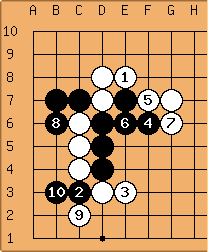 In this variation of the onadare joseki, any attempt black makes to break out into the center will fail, because doing so makes a "one eye" shape that is compromised by insufficient liberties. 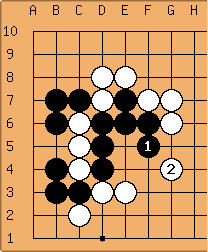 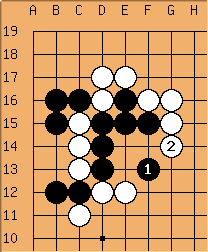 The Nihon-Kiin Small encyclopedia says "Try as he might, black cannot make it out into the center". I presume something like this sequence is what was meant. Black will give white good thickness no matter what. --gnostic? 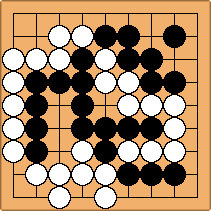 White can't start filling from the "outside" (the right side of the black group), as this "outside" is actually the "inside", I.E. the shared liberty between white and black. However, He's free to play anywhere inside the eyeshape, because for black to make an eye would cost him a liberty, plus the turn to move. --gnostic?