LovedInEmerald I just played a game with someone who was a higher rank than me but he opened in a very strange way which in my opinion shouldn't have worked (at least not as well as it actually did work anyways :p). The opening looked something like this. 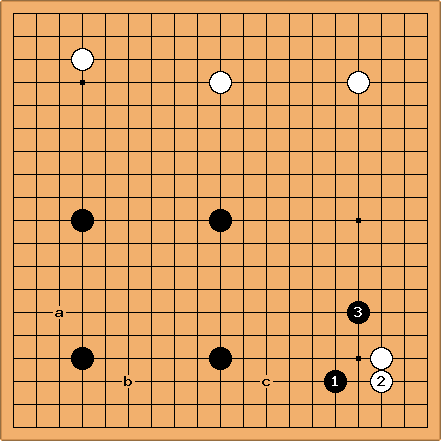 He then proceeded to build up a huge thickness by attacking my stones in the bottom left and before I knew where I was I found myself having to invade his huge framework with quite a solid base in the lower right corner. I'm sure this isn't a sensible way for him to develop or else I would have seen something on it by now so any ideas on how to combat this sort of opening? Thanks in advance for any help people can give me :).

Charles No easy way to discuss large-scale middle game operations at the level of generalities. The four star points box formation page is somewhere to start.

LovedInEmerald Thanks, can see the huge amount of things leading on from four star points box formation page might be a bit hard to condense into general terms :p. That reduction link leading off from it looks the most promising at the moment (just given that I lost due to not being able to think of a sensible way to reduce his territory) :).

looks very suspect: most likely it is not a good move.

Charles In this position, playing

is not a good move and in this position,

probably looks best. As for the strange opening from Black: I'd say it is strange, but not so strange as to actually be very bad. It is my guess that the average pro when looking at the diagram (before

) would prefer white, but switch to preferring black if white would get (say) 3.5 instead of 6.5 komi. Opening mistakes are rarely a very serious matter.

LovedInEmerald Ooh, it's interesting digging through all these old pages again. With the benefit of a small amount of experience that I didn't have when asking this question in the first place I would like to add some things (probably to be corrected after I find out they are wrong but hey :p).

It is important to remember that the box is not territory (see framework) and I have added a, b and c to the diagram as potential invasion points.

It is also important to challenge black quickly before the framework is strengthened as Black's influence will become very powerful if you are unable to establish a solid base on the edge.

OK, think that may be it for the moment with my resurrecting of old questions... enjoy the rest of the series when they come ;).