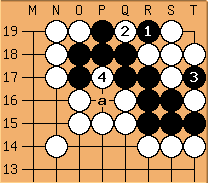 The solution according to the book.

Herman: Correct me if I'm wrong, but I think

is a mistake. With

at a, the black stones in the corner are dead. Like this, the situation is triple ko...

tchan001: I don't disagree with you at all. I'm just showing what was proposed as the solution in the book. It doesn't mean the author of the book is correct. But then it's not like we are going to just call up the author to point out his mistake. Ancient go manuals have mistakes, so do modern ones. Hence we have an errata section for go books on SL. Perhaps the author is trying to show what a mistake could turn into? The section this problem is under is about "Eternal Life". Or perhaps we should revise the problem and show a black stone at 'a' in the starting position so that it truly does turn into a triple ko.

Herman: My comment was not meant as a criticism toward you. Far from it! I am actually very happy that you're posting all these interesting problems here! Given the level of the problems in this book so far, I think it is unlikely that the original author made a mistake, so perhaps your suggestion that he had a special purpose showing it like this is correct. I was also posting my comment as a sanity check, to verify with others that I am correct and not overlooking something :)

Bill: Is there any explanatory text? The position after

is still dead for Black by modern rules -- except, apparently, Computer Olympiad Rules. (Black has no way to win the triple ko.) Perhaps this was not intended as a problem, but as an example of a rules beast. After all, Eternal Life is a rules beast, too.

tchan001: Other than the name of the problem, the only comment is that the first move is excellent 一妙 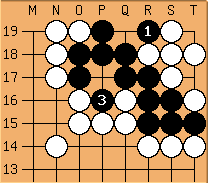 to make a kind of Moonshine Life. And if that is a real threat, then

is a mistake, as Herman says.