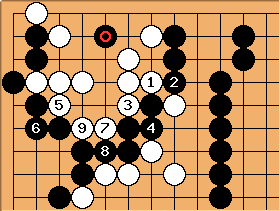 My feeling at the time was that White had to try and connect to the living group, thus allowing himself to make an extra eye. I don't think the above works though ;-) 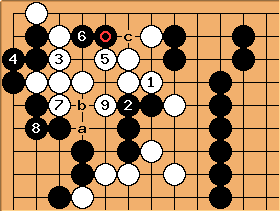 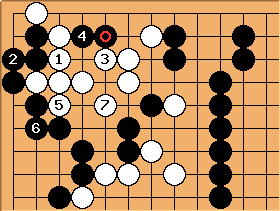 Notochord: White can live by taking advantage of Black's aji on the left, and then threatening to connect through, I believe. Black can resist by playing

, however, and the 3 right White stones look like they must die. I think I agree that this might not qualify as a kyu exercise, when we consider that the spirit of most life and death problems is to be relatively easy (training deep branched reading and intuition to be automatic). The goal of much life-and-death study, I think, is to be able to solve reading problems that appear in play (which are generally pretty easy compared to what we technically CAN read out) without fuss or error. I'm not sure that life and death problems with quite so much aji/complication crop up in most kyu games, so I'm inclined to say that this is probably a bit out-of-depth for most (self-included) kyu. I can be wrong on many counts, though.

This is a rather basic problem of "w to live" - Using weakness and sente to form miai. And such cases aren't rare in games. When one makes such moves instinctive (not as in playing without thinking but thinking of them early in the analys) s/he obviously will have it easier in cases where it's needed. I really don't find anything special here, I posted it as a "quickie". - That all said as the kyu that I still am... Reuven