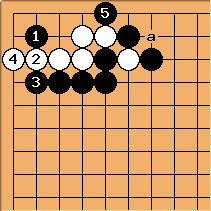 This looks like the only killing move to me, 1 is the vital point of the shape. If white plays here, it's definitely alive.

xela: What happens if white plays

LukeNine45: I guess we assume that the ladder is good for Black? 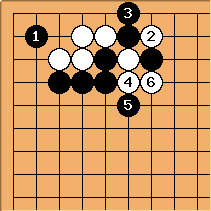 TimK: It's not a ladder, though. The stone on the right will be in atari.

Korlon: If white tries to atari, black will just take the stone. 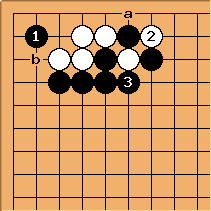 at b. No-one would argue that this is favourable for White.

Firstly, the placement at 1 in the above diagrams can lead to a ko depending on breakout aji, as seems to be the general concensus of the above diagrams' creators. However, if the white stone on the outside weren't here the best answer is black 1 in the diagram below. At which point if white c the black hane kills.

However white has 2 forcing moves on the outside.

If white plays 3 instead, if black captures the white stone a ko results after white 2.

However if black plays 2. White can play the sequence 3-b. Once again we allow white an outside hane in sente and a ko results. This time however even if the hane to the outside isn't sente black cannot kill unconditionally by playing at b.

If black tries the placement at 1 as suggested by the above commentators and and not allowing white to break out, allowing white the hane to the outside in sente results in white living unconditionally through to the diagonal play at a. 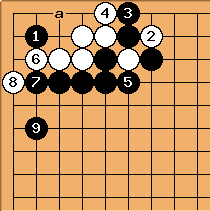 In conclusion, Even if black is willing to fight the ko on the side that white can create in an effort to break out, it is still better for black to descend rather than place inside the white group because if black loses the ko, the placement on the 2-2 point can be cut off later whereas the descent creates a thick position.

If black is unwilling to let white breakout then the black descent to 1 is the best option and it create a ko in which black takes first.

In an effort to be thorough, this problem calls for status. If white plays first on the 2-2 point or hanes to the outside white can live unconditionally.

Forgive my diagrams as I am very unexperienced in editing sensei's library pages.