The knight-sealed corner is a classical chinese joseki recorded in the Celestial arsenal; it has 17 differenet variations. For uniformity sake, Black will start first. 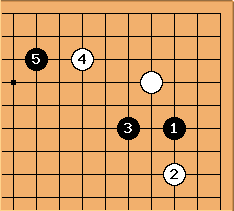 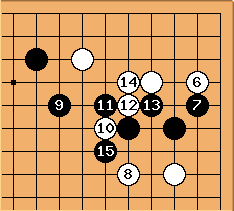 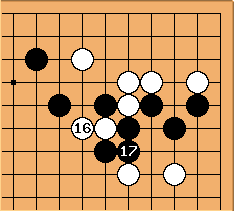 JohnF. The first diagram is not the starting position. Strictly, there is no starting position. The reference is to Black 9 in Var 14, but this move can be played later in some lines given in other books. I call it the Glide-Enclosure Opening. There are many niceties hidden in the name (or any term in classical Chinese go), but broadly we can divide them into two categories, though they do overlap. One relates to the use of native terms. The other relates to old Chinese go theory. Simplifying the arguments a bit, we can say that Chinese terms came first and so it is respectful to use their terms (this is not to say abandon Japanese terms for modern go). But more important than that, it is necessary to understand the old Chinese terms in order to understand old Chinese go thinking. One example of that comes of up here. The name is not feifeng, which would be sealing in the corner with a glide) or feizhao, which would be a loose surrounding move, such as a cap. The name here is feigai which is surrounding with a glide. The reason for making the distinction (as the Chinese did - it's not me who's being pedantic) is to do with group tax, hence the need to keep one's own groups connected and the opponent's disconnected. Or, more broadly, to keep the connection/disconnection balance sheet in one's favour. Feng, gai and zhao represent different techniques for influencing that balance sheet. The English terms I use here can only be suggestions, but the associations in my mind are that sealing implies complete surrounding, allowing the opponent no room for manoeuvre. Enclosing surrounds the opponent fairly tightly but gives him wriggle room, either to get out or to leave significant cracks in the surrounding wall. A loose-enclosure zhao (which implies a leaky bamboo basket) is really not much more than a first step in an enclosure and it is often diverted into use a move to control the direction in which groups run away. In all three cases, the connection/disconnection moves, techniques, themes and evaluations differ, and so should be discriminated in the terminology. In particular, Sir Lancelot should not form part of the narrative.