Key Concepts in Life and Death 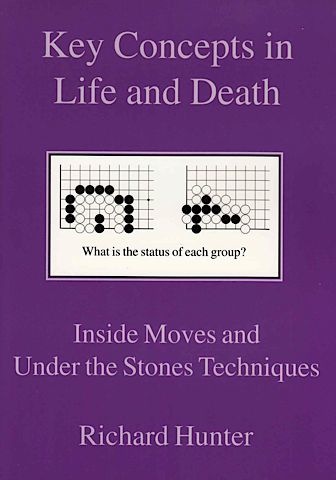 Published by Slate and Shell in 2007. See publisher's

description. Currently out of print and not included in the books available through Amazon Print on Demand. Retailers may still have some copies.

ZenGarden I highly recommend this book as a primer on life and death. What makes this book stand out compared to other competing tomes like James Davies' "Life and Death" (also good but less user-friendly) is the author's detailed explanations, building up from simple examples to more complex situations. I particularly liked the emphasis on recognising dead shapes and the techniques for creating such positions.

HughJfan I also like this book a lot. Definitely worth buying, especially if you already have James Davies' book (even if you didn't like his counting liberties - I found that too confusing which put me off getting this for a while). Starts at the basics of killing shapes and works up. I often miss this sort of solution when doing problems so it should be helpful in the future. I really liked Hunter's idea to alter the standard format of Go diagrams when playing back into a space (i.e. starting with the move that captures the stones but not the captured stones) - which does make it easier to follow and suggests he put a fair amount of thought into making it easier to read. "Life and Death", this book and "All about life and death" (sadly OOP) make a really good set of L&D theory books. Level to read at? hmm maybe 15k-5k?? but that's a bit of a random guess (and I'm only KGS 9k).

Key Concepts in Life and Death -- Inside Moves and Under the Stones Techniques last edited by bugcat on October 14, 2021 - 14:33
RecentChanges · StartingPoints · About
Edit page ·Search · Related · Page info · Latest diff