Jedyte: I was looking to have some people stronger than me (18k I think) comment on a move from a recent 3 stone handicap game. I hope it's alright to put this question here.

After forcing black and building some influence with

, I was completely lost to which move I should make next. The ideal solution in my mind would allow me to attack the black hoshi stone at the top right, while still being able to link up with the existing stones below. 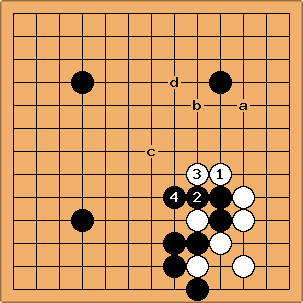 I finally settled for a, but it seems a bit conservative. Would a play at b been better, or maybe even along the lines of an extension at a point around c?

Morten (9k): Normally, 'a' is too close to the corner stone and you would want to play it one line lower, but that doesn't work well here as i't too close to your own stones.

Playing at 'b' trying for teritory is useless on a 13x13 board, where the corners and edges are far biger than the centre. Playing at 'c' doesn't do much at all, really.

From the 3 options, I'd say 'a', but, for the same reason as above, I'd think that you might have wanted to invade at the 3-3 point instead of 'a' as well.

Mef: If you want to attack the Hoshi and still make it hard for black to cut, I've added d. It will be tough for black to prevent that from either settling or connecting, and since white has to handicap to consider, adding another stone on the right feels like it's going too easy on black.

Jedyte: Thanks for your answers. Of course feel free to add alternatives, these were only the option I had in mind.

Mef, if I understand it correctly, you say should black cut off white somewhere below d, white stones should be able to make life?

Mef: Playing at d is one way to attack the 4-4 point, and in this particular case, A play at d will be either able to connect to the white group on the right or make life on the side if black cuts. 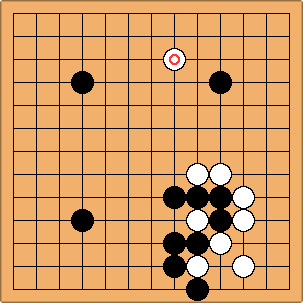 This should be the move. There are many variations that work here, however the general idea is to take a position along the top while forcing black into white's thickness. This uses the wall efficiently and also starts to aim at a play somewhere around a (for the same reason). The following diagram shows a possible joseki, and followup. 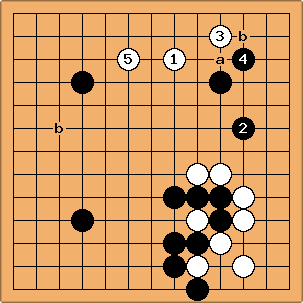 stone might be in a slightly cramped position, so another way to play originally might be to attach at a. The point of this formation is that black is forced into the white position and white gains another position on the outside. Also, white is partially compensated by the cramped formation by the fact that he can start attacks against either the upper right formation (settling his

shape), or he can initiate a double approach in the upper left corner (both points are marked as b).

This page has not been edited in almost 5 years, but it seems worth reviving. I think the original question is wrong. It should not be what to do after :

but rather whether those moves should have been played in the first place. In a handicap game white should not be trying to fix the shape unless it is absolutely necessary. In the position here it is always possible that the single white stone which was captured could have been revived later. I see nothing wrong with the first atari, but I don't like the second one. My choice would have been to play one atari and then approach the top as show here: 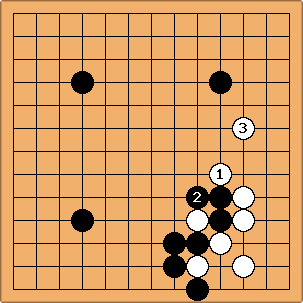