What is a よみ筋 ? (Yomi is in katakana in the original, but I don't know how to enter them here.) Is it just a move which has been precisely read out beforehand, or does it mean something else, very specific?

Tamsin: If it's written in katakana, it's difficult to know the meaning, because the visual cue given by the kanji is missing. I suppose the likeliest meaning for ヨミ is 読み having failed to come up with anything else plausible in my dictionary. So, my guess is that ヨミ筋 means 'reading technique'. Is it possible for you to give the go diagram too and its continuations?

BTW, you can use Windows Input Method to get katakana. You can choose to have Japanese Input Method from the control panel and other languages options - I'm rubbish at explaining this kind of thing, so please do what I did and look it up on wikipedia!

FredK: Here's one such diagram (from Aim at Shodan Go Course, by Gaku Yuzuru): 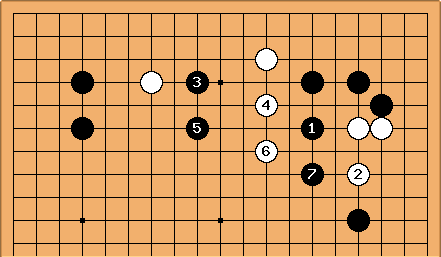 の打ち込みがヨミ筋です。 He likes the resulting triple splitting attack against W.) "Reading technique" makes sense in context. If that's right then I guess the phrase would just be a verbal flourish which doesn't refine the analysis.

Here's another, unrelated question, probably an elementary grammar issue: Is it correct that 押し込み and 押さえ込み bear the same relation to 押し込む and 押さえ込む as does 打ち込み (invasion) to 打ち込む (invade)? For instance my dictionary defines 押し込み as "closet", which is no good in context. It would be better if it means the act of applying pressure or something very similar. I'm assuming ithe "mi" ending yields a kind of participle, but I'm asking anyhow because I've learned that the words I think I know but don't, bite me harder than the ones I know I don't know.

Tamsin: Hi. The ending in む shows that this verb is in its plain form. The ending in み turns the verb into a noun. So 打ち込む means to invade, while 打ち込み means an invasion. Likewise, 読む and 打つ mean 'to read' and 'to strike' (to play) respectively, while 読み and 打ち mean the acts of 'reading' and 'striking' ('playing').

By the way, I thought it was quite interesting when I learned that you don't 'play' (遊ぶ) go, shogi and games like volleyball but 'strike' them instead (打つ).

John F. A yomisuji is a line of play (suji) that you have read out or prepared in advance.

To say uchikomi = invasion is not incorrect, but for someone in Fred's position it might help to think of it more precisely as invadING. -i stem words are verbal nouns. This can help unravel some tricky constructions. You can tidy up the translation into more idiomatic English later.

You don't utsu in shogi. You sasu.