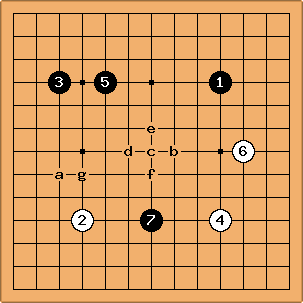 hexkid: In the real game I played a figuring

couldn't do much damage, at least for the time being. I wanted to enforce my position before going more active.
The way I see it,

is separating my two groups, but it is just a single stone not really connected to the top. My guess is that it will be easier for Black to connect to the top than to secure a base towards the bottom -- so maybe the best zone to attack is between the Black groups?
I don't really like any of these moves, but I thought about

If I had to choose one of these, I'd settle with e.

Alex: The usual move for attacking an invasion is a boshi, which would be f here. Reinforcing the lower left corner isn't a bad idea either, but your move at a was too low to have the effect of attacking the invasion indirectly. The high move at g might be better, even though it leaves you with an open skirt. On 19x19, I'd probably opt for g, but on a small board, I think f may be the right idea. Here's an idea of a couple possible contintuations (Disclaimer: this is pure instinct for me, I'm not doing any reading at all... don't have the time to): 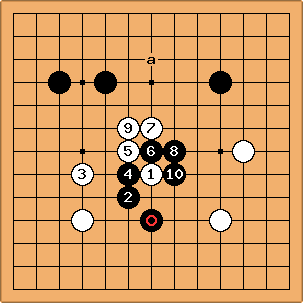 Alex: Followed by White making a counter-invasion around a, using the strength built up by

. Of course, there are other ways to play.