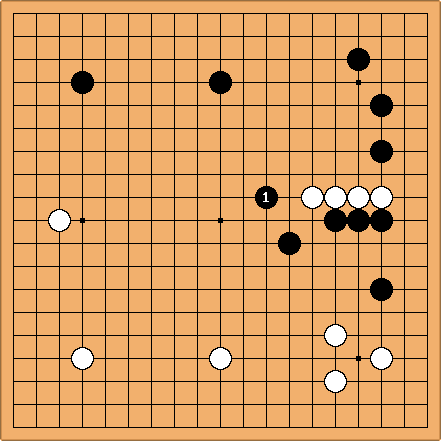 Black to play. Correct Answer is

. The answer explains: "Capping the four white stones with 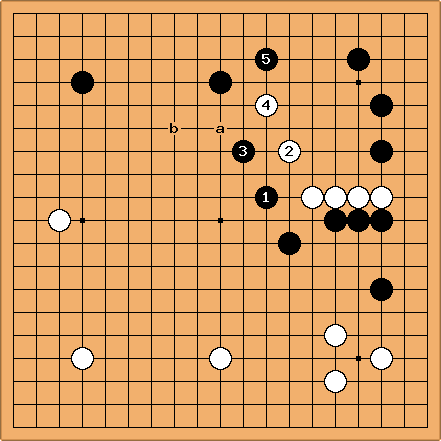 I am not sure how I could actually kill the white stones. Would something like the sequence to

work? It seems Black still has many weak spots. --- (Sebastian)

DJ: Hi Sebastian! Why do you want to kill? The sequence you have shown may not be best, but it is a good approach to the idea of winning a game by attacking and threatening to kill: White has to find a way to live (small, moreover), and in doing so it will necessarily solidify Black's territory on the top left and top right, and why not, give Black also thickness on the outside, which will give him a lot of advantage in any invasion he may devise on the left and bottom sides.
This should be enough to win, without actually killing the white group...

(Sebastian:) Ciao DJ! Good point. I was looking for a way to kill it because:

Gronk: Think of it this way: B is very happy to get

or thereabouts since it makes territory on top. View

as more-or-less free moves since they were forcing and W got little in exchange. Don't worry tremendously about cutting points unless and until they would threaten something big (a big kill or a big territory).

(Sebastian:) Aha! So you're saying that, even if W (after W established life, possibly helped by some mistake by B) manages to cut through, e.g. at a and continue with a finger to b, it doesn't really matter because that area wasn't really B's territory yet anyhow, and the finger helps strengthening my border territories. Correct?

Gronk: I speaking at a slightly higher level in that I can't say exactly what

have helped B more than W. B got to secure some territory with

and got some influence with

while W still has a weak group. If W makes a move to cut

off from the top, B will have an opportunity to further strengthen the top. Remember, W still needs to make life so cutting

is not so worrisome yet. Moreover,

may even be discarded later, so long as B gets compensation. Right now their value is rather vague (to me) but since they were free moves, that's okay. Finally,

are no more connected to safe W groups than