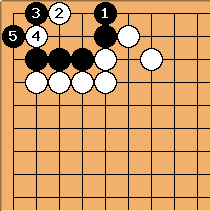 xela: I'm sure I've seen this position, or something very similar, arise as a trick play when invading the 4463 enclosure--but I can't remember the exact sequence. 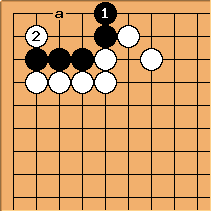 xela: I just found a comment in a book which says that

is the correct move. Maybe this (the position with an outside liberty) deserves a separate page (if it doesn't already exist somewhere on SL)?