ProtoDeuteric: Here is my attempt. Hopefully it is not too blindsighted. 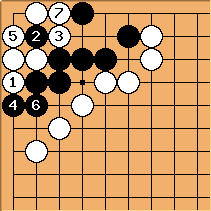 ProtoDeuteric: Again, I am sure I misread somewhere, but this is a good try for me. 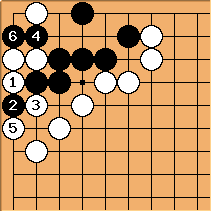 is a better answer to 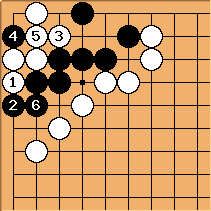 If White is to succeed in killing Black, we need to first think about a few things.

Conclusion A: White needs to make the corner group live by giving them two eyes, escaping to friendly stones, or destroying the liberties of the surrounding group first.

This less obvious arrangement of White stones could be used to escape along the top. However; Black would be reluctant to let White escape out so easily. These three White circled stones have only three liberties themselves. Where would Black's moves go if this mistake was made? Are some places better than others? Could the threat of this be used in some way?

The White play at 1 is an obvious way for White to connect the White stones out along the left side of the board. The White stones crawling along have a weakness that Black can exploit if White is comitted to connecting them out.

Black, having more liberties than White -- weakens the merits of a direct liberty battle. Squeezing and tesuji plays to eliminate Black's liberties seem limited to taking away Black's eye shape making space. If White can develop a rabbity 6 shape inside Black's group (obviously when Black can't make other eyes)... then the Black group will die. If White plays at "w" a rabbity 6 shape is made, but it doesn't stop Black from having another eye at the top. 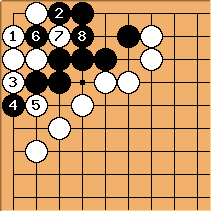 appears to be Black's strongest resistance, leading to ko. 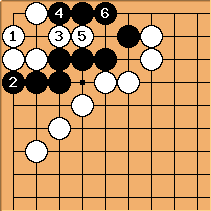 threatens to make two eyes. If

, Black dies in gote because the corner is going to be almost filled with flower six.