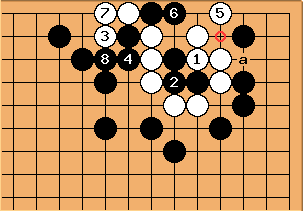 (the order of which is important) then with

threatens to make a second eye: Black can't make it false at the marked point, because White will push through at a and take two stones. So he plays

, upon which White connects at

Now at first sight, the shape is one of a dead group: a three point big eye, and a false eye at the top. 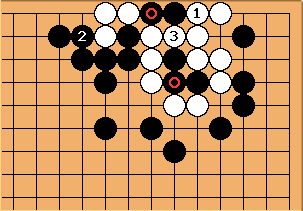 , making miai of replaying under the 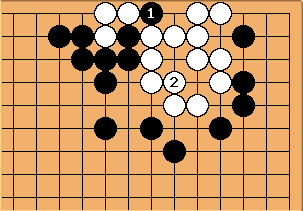 When Black throws in, White makes two eyes at

, sacrificing three stones at the top.

There are many opportunities for White to go wrong. Let's analyze some:

(To be continued - please contribute if you want.) 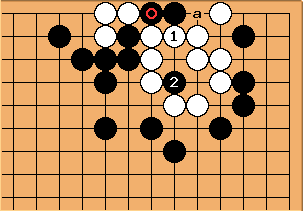 instead of a, Black answers at

to keep White down to one eye. If next White captures two stones at a, he throws in at

. White should capture simultaneously to make miai of Black's answers. The order of a and

and White 11) is important. 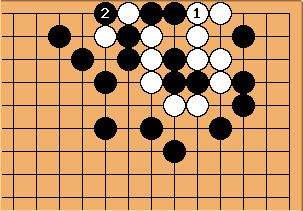 here (instead of connecting at

and the miai are destroyed. 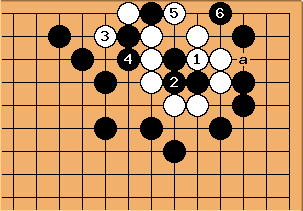 White has now one big eye almost filled with three stones. There is no threat in a. 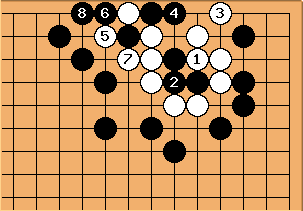 If White changes the order of

, Black can answer at

and make it ko with 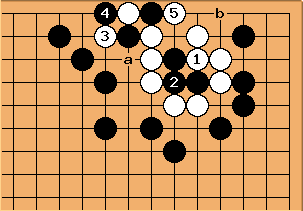 In the main line, White hasn't yet exchanged b for

, so when she plays atari at

If the order of

didn't matter, then either one of the answers would be different. 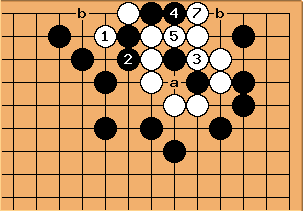 Suppose w3 is not answered at a; then 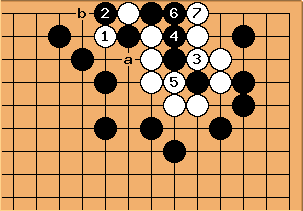 But Black can answer

as in this diagram. Next, White comes one move too late: after

Finally, what if White ataris from the other side ?

I thought, well, now Black can destroy the eye with

, since the aji now works against White: