, which makes an eye at the circled point, a and b are miai for life. 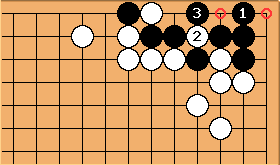 , Black has real eyes at the circled points. 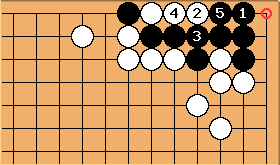 It seems as if

creates a false eye, but the capture of three stones on the first line with

results in a real eye. 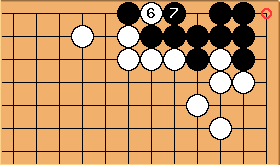 Even if White throws in at 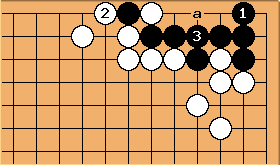 If White captures a Black stone with 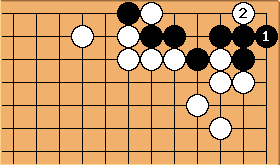 at the other 1-2 point is wrong. With

, Black is dead. Even if Black is allowed two moves in a row, he can't live.

here, White can choose between a and b to kill Black. Someone with an opinion which is the better ?

We must look at the ko threats black has. Here black can make two eyes by playing both 'a' and 'b', so either of them can be used as a ko threat. However, this is the only threat black can have from this position.

Here black will again live by having both 'a' and 'b', so they are both ko threats. Again, no more threats for black. So, are the moves equal?

Let's say the ko was crucial enough that white had to ignore this threat. Can white have ko threats of her own to kill black again, if another big ko appears in the game?

is the best she can do, threatening to make a ko for black's life at 'a'.

Here, however, white can make a threat to kill the black group without a ko (by filling at

). 'a' is still playable, for the ko would be a hanami ko for white. Therefore, I feel that 'b' was slightly better than 'a', but the difference is really small. --Dansc

What is this diagram about? It isn't part of the immediately prior sequence. -- SGBailey 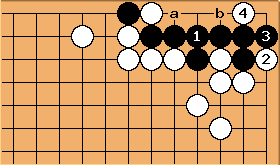 , as shown here, is also wrong.

leave a and b as miai for the kill.

Analysis by Members of Sensei's Library 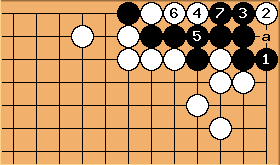 Making the eye as large as possible, with

here, seems live, but it is not the solution from the book. After

follows, and Black lives as shown.
Alternatively, if

would be followed by

If Black 1 is a mistake, then it must be because White can next play at 2. If Black now plays 3, White 4 kills the entire black group. But ... 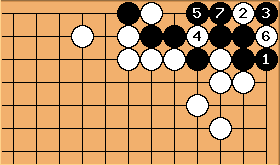 The authors of the variations shown here, have not yet found the reason why

in the Main Line of *Solution* is preferred to

of *Analysis by Members of Sensei's Library*.

I received the following suggestion. White 2 is sente against Black 1. If Black doesn't answer ...

Bill: Maybe this is the main line. 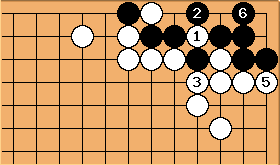 To avoid that, maybe White should start with

is sente. This is better for White than the next diagram.

In the Main Line solution , White's descent at