This page describes a non-standard way of dealing with repeated positions. Most ko rules act strongly to make repeating an entire board position impossible ("super-forbidding"). Another naive approach is to still discourage plays that repeat the position, but grant players the right to, in the simplest case, recapture a ko stone. The result is that ko shapes are always resolved peacefully, with no repetitive cycling, and little of the strangeness inherent in traditional ko situations.

Rule of ko: If a move causes an exact repetition of a board position from a prior turn, the stone used to play the offending move is removed from the board (if applicable) and placed in the opponent's captures pile.[1]

In other words, repeating the (entire board) position is forbidden, in the sense of capital punishment for stones that are repeat-offenders. The tentative name "Geneva" suggests an enforced "truce" on ko fighting. The horrible crime of repeating the position is penalized, but can still be committed.

Under the Geneva Ko Rule, endlessly repeating cycles are not possible with rational players! After playing out the cycle once, the first recurring move in such a cycle would be a one stone suicide - might as well be a pass.

Next follows some reasoning that leads to adopting this approach to the ko problem, and consequences.

To avoid cycles, white b after

must be forbidden. But Black

, in self-atari, has little right to assail White's position. White might expect to capture

, and Black would normally need an approach move at b before playing inside the tiger's mouth. Similarly, if White has more external ko threats, should White have the traditional right to "win the ko" - that is, play two moves in a row in this local situation?

White plays b above, capturing

and repeating the initial diagram. The stone

is forfeit. The result is Black's turn. Approaching at c next is forbidden (taboo, if you prefer).[2]

White and Black maintain a deserved amount of control over a and b respectively. The peaceful result

MrTenuki: Let's see what happens with kos that are more complicated:

Result: White's upper left group is dead, while the upper right corner turns into a mannen-ko.

Slarty: There is no ko for capture in the upper right. The result is seki.

takes back, clearing the ko of stones.

MrTenuki: Actually, on second thought, it seems that this proposed ko rule would turn the vast majority of kos (if not all of them) into non-kos. To see why, consider the following example (a ko for life under "normal" ko rules): 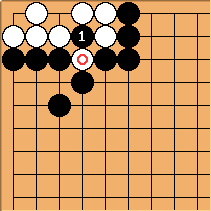 , White can simply capture back with

. It doesn't matter that

would also be removed in the process, as the important part--removing

--is accomplished without the need of a ko threat. While Black could play a ko threat elsewhere to regain the ability to play at

again without losing the stone, White could always capture back. That means the White group is actually alive under the Geneva Ko Rule.

For another oddity, let's look at this Eternal Life example. Given this initial position, the four-move cycle that involves

would be stopped at the third move (

can be played, but it will be removed immediately). So, the Black group is essentially alive.

[1] Use the rule in this format with territory scoring. If using area counting, add or subtract one point from komi instead.

[2] Note: If Black plays c, the position is still a repeat after the offending Black c is removed. Like passing, this is of no concern. Taking back and forth will not occur.