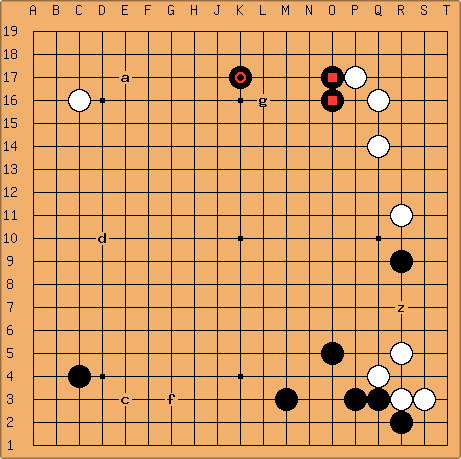 There, because it prevents the black stones from having to run and if White plays a or c, Black still gets the other one, but doesn't have to fear for the life of the group, which gives him strength elsewhere on the board.

Why isn't c as good? It secures the sides and corner, though I'd rather have played it at f... and what's wrong with the black stones there running? Build up some thickness on the top to disrupt White...

Fhayashi: Because white "c" now would potentially create a weak white group in the midst of all the black stones (imagine black "f"), while white "b" would make the two black stones on top weak, without white "b" itself being weak.

ProtoDeuteric- I believe that the question to which Fhayashi responded was meant to ask why black wouldn't play "c". I agree that "b" is better, but I just want to clear up the question.

TA?: Yes, but the reason why "c" is inferior for black is because it's inferior for white. While "b" and "c" are both good for black, only "b" is good for white, so black should play there first. I think. :)

grolich: No, that is not the reason. The reason is much simpler: the move on top is urgent, the move at c is not. if white gets to play on top instead of black, the black group will be eyeless, and far away from friendly groups so that white can easily split the black formations. From the original question I think the reason for the misunderstanding becomes obvious: the assumption that the black group on top would become thickness if it runs and adds more stones. That is the heart of the mistake. a lone "stick" of stones, with no base for eyes on the side and with opponent's stones in its vicinity is not thickness, it's a very weak group floating eyeless in the center. And since it will be eyeless and easily split from the rest of the black stones on the board, black cannot use it to disrupt white's stones (another important issue: you cannot attack in areas where you are eyeless and floating, while your opponent is not). the move on top, strengthening the black group is urgent, and has to be played, or it will be white who will gain a lot of thickness in the center by attacking the weak black group.

ThaddeusOlczyk: The best that the right black stone can strengthen himself is by playing at z. Yes it doesn't have far to run, but it is still weak. That means the upper group would be a second weak group. Solidify it with b.

Bill: If Black neglects to play

, White will attack the weak

stones with Wg. With no eye shape, those stones will be heavy, difficult and costly to defend, difficult to throw away.

Spectrums- I agree. C is the correct answer.

buggler - I thought we agreed that C wasn't the correct answer?

xela: Gosh, this discussion is confusing! The diagram at the top of the page is the correct answer. If black plays c instead of

, then white will play g, and that result would be better for white.

mike?: I agree that the diagram is correct. This helps secure a side and strengthen the stones at the top. Black at anywhere near the bottom seems self-gote.

Pashley(8k?) I agree b is the best of the moves suggested in the question, but I'd be inclined to play on the 4th line, k16, instead aiming at more influence toward the center. Would that be a mistake or just a different choice?

Move on to: Fuseki Exercise 3