Timm(5k): In my opinion d and c would be too territorial (and slow) in this context, and e seems premature as the right side's still open.

a and b both seem to be playable. 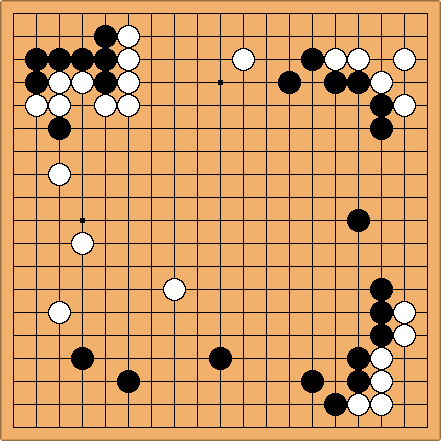 b looks faster but I'd be afraid that White may invade at the bottom right san-san and then play the big move in the center. But Black's moyo is maybe still bigger ?

a looks more solid. White would obviously want to play the susogakari on the bottom but it could be a bad idea to create a weak group there. If White enters the right side from below Black can build from the bottom, and reducing from the middle doesn't seem enough either. So maybe a would lead to the easiest game ? 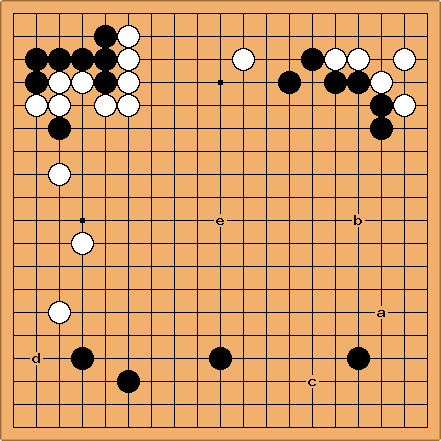 Dieter: your assessment is correct. This is indeed what happened in the kyu amateur game. Yan Laoshi suggested a instead, because the top left was open and in terms of influence the move would overlap. Territorial prospects lie at the bottom and right, which is why the bottom right is the proper place to play.

tapir: It is odd, that this kind of problem does not even mention all the moves I would think about in the proximity of a. 4th line, more distant moves etc.

Dieter: In his game comment, Yan Laoshi mentioned the large knight's move, one point above a, as another viable option. He still preferred the tighter a. I did not mention it as an option, precisely because it seemed to be playable too and I wanted to make a clear difference between "the" move and other moves that look playable to me but were not supported by the pro. 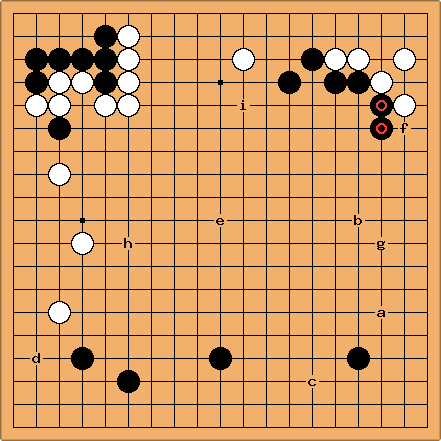 unkx80: I've read the above discussions, but I'll provide my own opinions anyway: 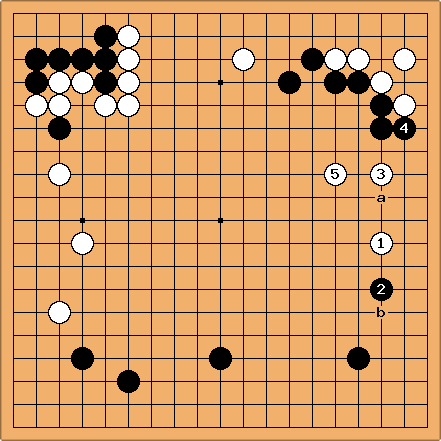 is very annoying. If

builds a base. At the same time, it looks like the black group at the top right has turned from a source of influence for black to a possible target of attack for white.

On the other hand, if

at b builds a base too. Then a will be too close to the top right group, and the position is still open at

, so I don't think black will be satisfied.