This is a variant ChrisBandy came up with on April 16. This is the alpha version of Conquest, which is a much more playable game, as far as I can tell.

1. Enclosing a region captures all enemy stones within.
2. It is illegal to play in a region enclosed by the enemy. 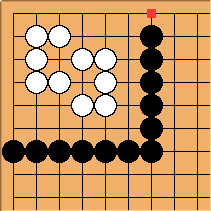 If black plays at the square, then all the white stones are captured, and it becomes illegal for white to play within the enclosure.

Clarification: you can enclose enemy stones using the wall, but only if you have a shape that either (1) touches same wall twice, or (2) touches two adjacent walls. This prevents someone from capturing the entire board by simply building a bridge between opposite walls. If that were the case, then the game would be Hex, not Go!

Clarification: you can play in an "illegal" space if and only if it leads to immediate capture of enemy stones (just like in normal Chinese rules).

Herman What happens if a player connects two diagonally opposite corners? :)

ChrisBandy Lol he would capture the entire board. So I guess the first two stones of the game will always be placed in opposite corners. That's...joseki, right? Lol

But anyway, you can see why I abandoned this version! :)