Conquest is a variant of Go that Chris Bandy created. My hope is that it is a balanced game with an emphasis on large territories rather than small fights. The rules are very simple, but there are a lot of fine points which I believe I've settled in the examples below. Feel free to offer feedback and criticism. 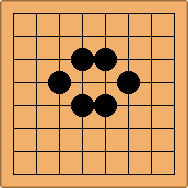 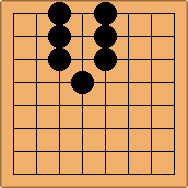 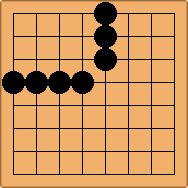 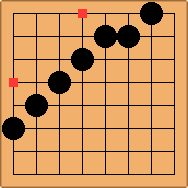 The connection points aren't in the same or adjacent quadrants. Black doesn't own anything. Black would need to play at one of the

to own the upper-left region. 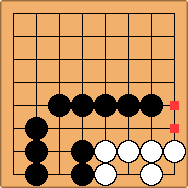 If Black plays at either

, then all of the stones within the region are removed (white and black), and the region is permanently conquered by Black. Note that, since Black has two spaces where he can play, White cannot prevent this from happening. 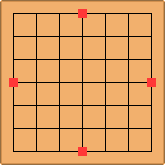 On an odd-numbered board, each of the four "T-bone" intersectionsthose that are against a wall and in two quadrants at oncemay be used as a connection point in either of the quadrantsbut not both! 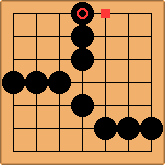 Since the upper-left region is smaller than the upper-right region, the

counts for only the upper-left quadrant. Therefore, Black owns only the 9 spaces on the upper left.

If Black plays at the

, then Black will gain the remaining 15 spaces in the upper-right region. Then the 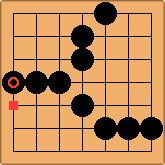 Black may play at the

, but doing so will not remove the

. The reason is that if the

is removed, then Black's only connection points enclosing the upper-left region would no longer be in the same or adjacent quadrants. That would mean Black would lose his entire territory, which is prohibited by the rules. 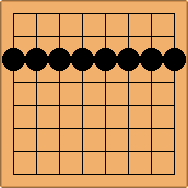 A region is not conquered if you've used three walls as edges of your border. Black doesn't own anything. 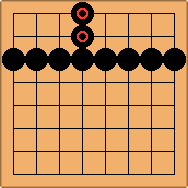 Now Black owns 14 spaces, and is not allowed to remove either

, because without them, Black wouldn't own anything.

Trying to make an expansion by placing around either

is illegal and pointless. It's illegal because you cannot play inside your own territory. It's pointless because Black already owns all of the spaces up there, so there's nothing left to gain. 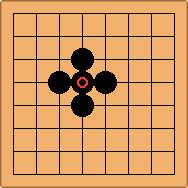 Conquest using your own stones. The

is removed, and then Black will own 1 space. 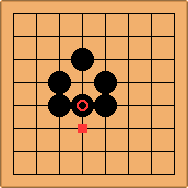 Black may expand his territory by playing at the

. Doing so will cause the

to be removed, because it will be completely inside the region. Black will go from owning 1 space to owning 2 spaces. Practically, Black could simply slide the 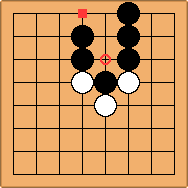 White can capture by playing at the

. However, if Black first plays at the

will become part of Black's territory, and therefore be off-limits for either player. 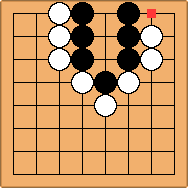 Even if Black conquers a region, White can re-conquer it by surrounding Black's border. If White plays at the

, then all the black stones are removed. Note that the three inner spaces are still off-limits to either player, but they are now owned by White instead of Black. 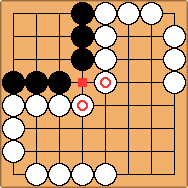 If Black plays at the

, it doesn't earn him any more points, but it prevents White from playing there. Such a stone is called a Salient. If White plays at the

, then white removes the two 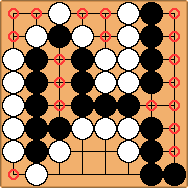 Territory is empty spaces that are conquered by a player. 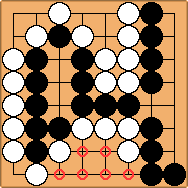 No-Man's Land is empty spaces that are not conquered by anyone. 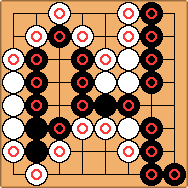 Fronts are stones that touch empty spaces, and that are directly helping to enclose (or could eventually help to enclose) regions. 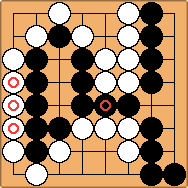 Links are stones that do not help to enclose regions, but rather connect multiple enclosures to each other. 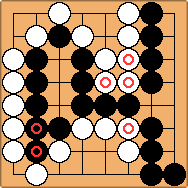 Salients are stones that neither help to enclose nor link, but simply jut out and prevent enemy expansion. 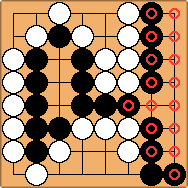 Fortresses are territories that can never be re-captured, because of their intrinsic position and size (not because of linkage). A fortress includes its front.

Bridges are stones that touch only a player's own stones and his own territories. They ensure that a player's territories are legally owned, by keeping the number of walls used below three, or by making sure that the two connection points of each territory are in the same or adjacent quadrants. 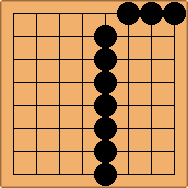 The largest possible "convex" territory can be achieved by enclosing half of the board, but making an "elbow" so that only two walls are used as edges of the border. 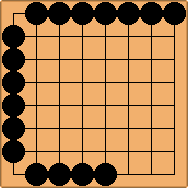 The largest possible "concave" territory can be achieved by taking the previous territory and expanding it to the left. 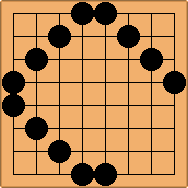 I think that the fullest conquest of the board be achieved by making an incomplete diamond as shown in the image. Black has conquered 51 spaces here. If someone can conquer even more, please replace this image with yours! 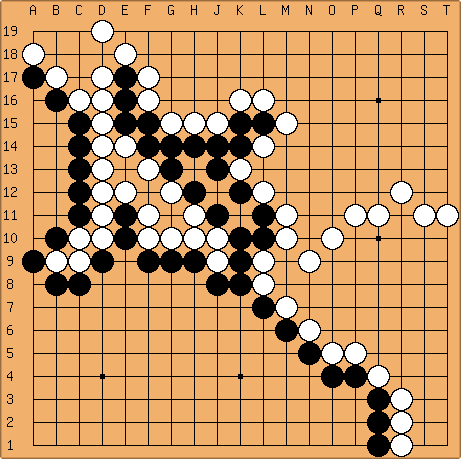 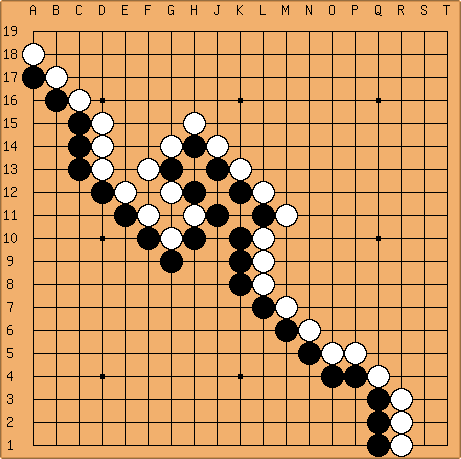 This is an alternative way to score territories. At the end of the game: