Yesterday I played the most entertaining game ever. I was using my blitz account yoshiyoshi with time settings at 10 seconds a move, and apparently neither player could keep his head straight. I think we each made about 10 mistakes that were worth 30 points or more!

here if you want to check it out. 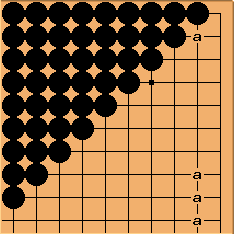 At the beginning of the game, black has 55 choices with which to open with. That may seem like a lot, but I think it's possible to look at it in a different way.

Since true komi is rumored to be either five, six, or seven (I'll be using six for this example), the first move's worth can only range from 0 (completely worthless) to 12 (kami no itte). Of course, one could argue that opening at the 1-1 point can be worth -1, so lets just use area counting.

Dividing the 55 opening moves into 13 groups, each will contain an average of.. 4.23 moves. Taking into account that the number of moves in the extremities would number less, I would bet that there are still 2 or 3 moves worth the full 12 points. Meaning, it's likely that there is indeed more than ONE right move to start with. And even if there isn't, there's probably 3 or 4 moves worth 11 points, so all of the most common openings, 4-4, 4-3, 3-3, 3-5, 4-5 (only five here) should be either perfect or only give a one point disadvantage.

Anyways, the point here is: I think the only reason go players are better at certain openings than others is purely because of familiarity. If we took the time to learn the other openings, it shoudln't give us any true disadvantage - in fact, the one point can be more than made up just because your opponent will be less familiar with it than you are!

In case you were wondering, the letters on the board represent what _I_ would guess as moves being worth 6 points - that is, moves that would lead to a jigo if B plays there. Also, 4 is the guess of how many moves would fit in this category. Unlike a standard curve, I don't think more moves would be in the middle, but rather in the 7-10 range, where most moves in the center would fit. No way W has already made up his komi by a black play in the middle. So in other words, the letters represent games where if B plays there, W will have exactly made up his komi.

Anyways, I put this up because instead of using komi, a way to start a go game is for one player to make a move, and the other player gets to choose which color to be. If the game ever becomes stagnant, the pros should adopt this style - just think about all the new joseki they'd have to make up and we'd have to learn :-)

3 months without Go is really painful to say the least, especially as internet go had become such an addiction for me. Over the summer I must have gone through the downloadable version of goproblems.com like ten times. I also went through a lot of the higher-ranked reviews of GTL, and managed to get a couple of games going on a e-mail based go-server. To be honest, however, even though I did spend a large amount of time on Go over the summer, I really didn't improve much at all. That is kind of disconcerting. Instead, now I'm hoping that what I did over the summer will help me improve faster when I start playing again. I do feel as if I know a lot more, I just need to put it all into practice.

Anyways, my goal for shodan is still 1/7/05. That's a year after I started playing on KGS, though I actually learned the rules of Go a little while beforehand.

I think to avoid playing the ranking game if I do get to the 1k/1d barrier, I'm going to define reaching shodan as this - over five consecutive games against five different shodans, I have to win three.