Instead of counting both black and white territory, it is possible to count just one of them, using area counting. Especially in online games this is convenient, since you have to know the number of moves already played.

Asume you want to estimate the score in the following diagram. Note: It is black's turn. White has captured one stone. Black has captured two stones. 30 moves have been played. 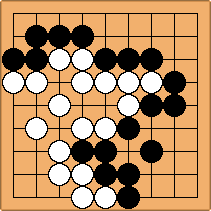 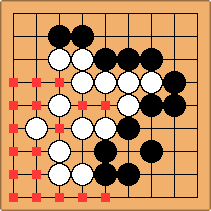 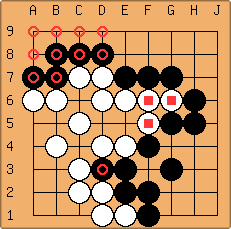 Another quick counting method based on area counting, which is especially useful for a 9x9 board, is what I call the 'half board comparison'. To take your 'final position' as an example, if black gets the right half of the board, and white gets the left half, dividing the center line equally, the score will be even. We look how much we are away from that.

White has the squared points within "black's" half, black has the circled ones in white's. Also, black has one more point on the border than white. Black has won (according to Chinese counting) by 2x(11-3)+1=17 points (the factor 2 is because each move across the border is both one point more for the player and one less for his opponent). On 9x9 this is often a quick method of estimating the score; on larger boards it usually does not work because players have their territories divided all over the place rather than roughly dividing the board along some center line. - Andre Engels

I don't know if it's just me, but it took me a while to find that point he was referring to so I think it's worth clarifying.