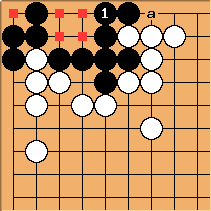 will be neccessary sooner or later, so Black has five points in territory. 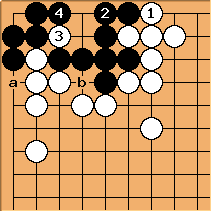 is sente after a or b is played by white,

is enough. Black still has five points of territory: 3 empty intersections + 2 for the capture of

Lynx: If W plays, couldn't W reduce it to only 4 points, by semidori? W could play a peep to the stone, then force B to play another move inside by semidori.