(Rant): It bugs me to call positions where one player has made two moves in a corner, but cannot prevent the opponent from living inside, an enclosure. Grrr. -- Bill

Why? The two stones might not be territory, but they are definitely an enclosure in the sense that any opposing stones inside that live will be unable to connect to the outside. Seems like a pretty good description of an "enclosure".

Bob McGuigan: Maybe this is an artifact of translation. Of course the Japanese word is shimari, a nominalization of the verb shimaru whose principal meanings are "be shut", "be closed". However shimari outside of a go context means "tightness", "firmness", "steadiness". I'm not so unhappy with "enclosure" though. But the second sense I gave wouldn't contradict the opponent being able to live inside, would it?

mAsterdam: Would a Japanese go-player call a "positions where one player has made two moves in a corner, but cannot prevent the opponent from living inside" a shimari? It seems to me it is ok to have the english go-term "enclosure" have a meaning as close to "shimari" as possible. 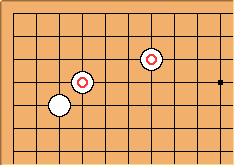 When I was learning go, this was an enclosure, but not just the

stones. In fact, I learned that one characteristic of the 4-4 was that you could not enclose the corner with just an extension.

More recently, however, I think I have seen the

stones referred to as a shimari (enclosure) in Japanese text. I do not know whether this is a language change or not, because of the popularity of the 4-4.

But that's why I just made a rant, rather than claiming that the

stones do not form an enclosure. 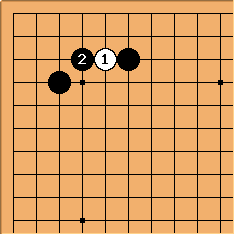 Dave: White has just attacked this well-known enclosure. According to my copy of Igo Daijiten (1977 edition), White can live but usually the superiority of Black's outside influence will make the result unsatisfactory. 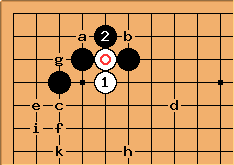 Tderz: I guess, Yes, White won't live inside.
White will use

for some outside influence, e.g. activating it by white a, Bb (preventing ladder d), Wc, Be, Wf (threatening W ladder g - h), Bi, Wk.
This is just one idea - white must have had a special plan in the first place, when attaching at

without the help of neighbouring stones. 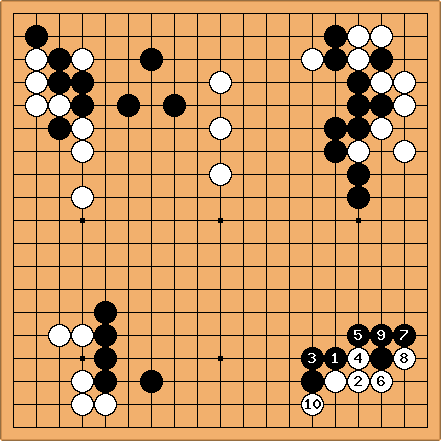 Here is one of the rare examples in pro play of such an invasion in an otherwise empty quarter of the board (no support from outside stones for White). O Rissei invades Yu Ch'ang-hyeok's enclosure. 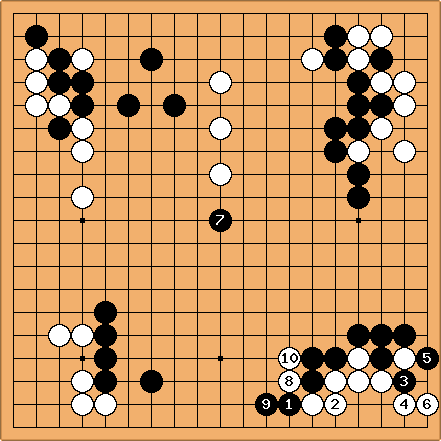 The continuation up to

here is also in Igo Daijiten. Interestingly enough White lives with both the cutting stones at the bottom and the pillar of stones on top that Black caps with

. However, Black makes too much territory while chasing these various groups around the board. Result B+R :-)