One of the most difficult habits to break in my students is that of playing too closely. No matter how many times I tell them to back off, my students will -- over and over -- play contact moves very early on, attach in futile attempts to stop reducing moves, and fight senseless battles to try and kill huge, strong groups. As a result, I've developed a lesson for teaching the valuable lesson of playing at a distance.

The rule is: No playing beside an enemy stone for the first 20 or so moves. (Generally I watch the game and decide when the restriction can be lifted, then announce that any move is fair game.) Diagonal moves are also off-limits.

In this example, all of the marked spaces are off limits for white. Obviously, there comes a point where it's impossible to play without playing beside an enemy stone -- and there are pitfalls to this method, to be sure. (Defending without being overconcentrated can be tricky.) However, I've found it to be tremendously successful in demonstrating -- allowing the student to demonstrate to him/herself -- the power of not playing so closely.

When last I used this in a 5-stone handicap 13x13 game, my student (who often loses by a considerable margin) whomped me soundly, because he had established solid walls and impenetrable positions.

And yet this method is also useful for beginners playing each other. The urge to fight early and often (and recklessly) can be challenged in even games as well as handicap ones. 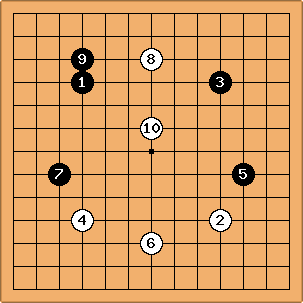 Here is a sample of how the first 10 moves of a 13x13 game might look. Notice that playing beside friendly stones is okay.

Try it out, see how it works. Lemme know what you think.