A dame ko threat is a move played during a ko on what would be dame under Japanese rules, however if the game is being played using Chinese rules, in some circumstances it could be important to answer it.

Quick rules of thumb for the komaster

The following game uses Chinese counting, with 0.5 points komi. In order to win, white must win the ko and not let black get 2 points more than white in the dame. 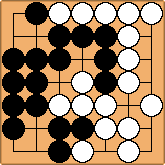 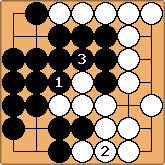 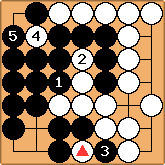 , black passes then white plays at

to win by 1.5 Here there are 3 dame, and white has one more point than before. In this case white need not answer a black dame ko threats as black can only gain 1 point that way. 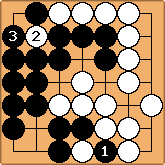 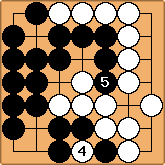 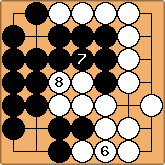 It doesn't affect the score if white answers

. Black may take the ko instead of

, but it doesn't help as white has has 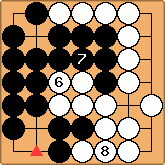 When reasoning by territory-scoring, this fight is interpreted as fighting to keep the point of territory inside the last ko, if you manage to leave it open after dame are filled and the opponent can only pass, which was a rule accepted by Shusai and Go Seigen but not by modern Japanese rules, and is the base of this historical dispute under Japanese rules

Area scoring rules implicitly allow to count this extra point of territory, because filling it once all dame are filled is free, so you can re-interpret it as not filling it and counting the point as territory. If that last point of territory were allowed to be kept, these fights would make sense even under Japanese rules. A more detailed analysis of these equivalence is given in

general study of all cases with only basic kos and dame under area scoring.